Harry Potter and the Order of the Phoenix – Chapter 4 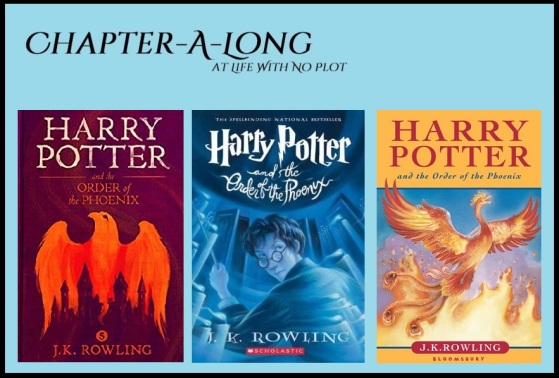 In Chapter 4, Harry is reunited with Ron and Hermione and has a complete and total rage breakdown. Let’s go!

At the end of the last chapter, we ended up at number twelve, Grimmauld Place. But where is that exactly? The piece of paper says that it is the headquarters of the Order of the Phoenix, which you know is important since it’s, you know . . . in the title of the whole book.

Moody is being his paranoid self and burns up the piece of paper after Harry reads it and tells Harry to basically shut up. Here’s the thing though: looking at the houses, there is no number twelve. There’s an eleven. A thirteen. No twelve. Lupin tells him to think about the note that he had just read.

Harry thought, and no sooner had he reached the part about number twelve, Grimmauld Place, than a battered door emerged out of nowhere between numbers eleven and thirteen, followed swiftly by dirty walls and grimy windows. It was as though an extra house had inflated, pushing those on either side out of its way. Harry gaped at it. The stereo in number eleven thudded on. Apparently the Muggles inside hadn’t even felt anything.

They go inside, after Lupin warns Harry not to touch anything, and the place is really spooky. It looks like an abandoned building, dirty and musty and dark. There are cobwebs everywhere and moldy paintings on the walls. But who else is here? Mrs. Weasley! She can light up any room, although Harry notes that she looks “thinner and paler” than the last time he had seen her. She gives him a big hug and tells him that he will have to wait a bit for dinner because there is some sort of meeting. Harry wants to follow, but Mrs. Weasley told him that the meeting is for members of the Order only. But Ron and Hermione are upstairs, so she directs him that way, with a warning to keep his voice down in order to not “wake anything up.”

Also weird, let’s just catalog the bizarre things in this house. And this is bizarre for the wizarding world, not just bizarre in general.

Harry heads up to the door Mrs. Weasley pointed him to and he is immediately engulfed in a Hermione hug. Yay! They are all together again!

“HARRY! Ron, he’s here, Harry’s here! We didn’t hear you arrive! Oh, how are you? Are you all right? Have you been furious with us? I bet you have, I know our letters were useless — but we couldn’t tell you anything, Dumbledore made us swear we wouldn’t, oh, we’ve got so much to tell you, and you’ve got to tell us — the dementors! When we heard — and that Ministry hearing — it’s just outrageous, I’ve looked it all up, they can’t expel you, they just can’t, there’s provision in the Decree for the Restriction of Underage Sorcery for the use of magic in life-threatening situations –“

I get the impression she said this all in one big breath. Ron is also there, and so is Hedwig. Hedwig is a good owl who follows directions. She has pecked the heck out of Ron’s hand after Harry told her to keep at them until they wrote back detailed replies. Harry was at first very happy to see them, but starts to lose that feeling as he thinks about how Dumbledore had deliberately kept information from him. Think about it. Ron and Hermione would never keep stuff from Harry, but they did so only because Dumbledore made them do it. Dumbledore told them it was to keep Harry safe, but how safe was Harry back on Privett Drive with dementors flying around?

Harry is really, really not happy. He feels betrayed by Dumbledore, first of all, and now it seems like Ron and Hermione are trying to defend Dumbledore’s decision to leave Harry in the dark. The more they try to explain themselves, the more angry Harry gets. Sure, they were only following instructions. Okay, they were worried about putting anything in a letter that might get intercepted. Harry can’t help but wonder if Dumbledore either thinks he can’t be trusted or can’t take care of himself. He wanted to be in the thick of it, like Ron and Hermione have been, hearing the news and knowing what’s going on. When Ron tries to explain that they don’t know anything since they’ve been kept out of the meetings, Harry explodes.

“SO YOU HAVEN’T BEEN IN THE MEETINGS, BIG DEAL! YOU’VE STILL BEEN HERE, HAVEN’T YOU? YOU’VE STILL BEEN TOGETHER! ME, I’VE BEEN STUCK AT THE DURSLEYS’ FOR A MONTH! AND I’VE HANDLED MORE THAN YOU TWO’E EVER MANAGED AND DUMBLEDORE KNOWS IT — WHO SAVED THE SORCERER’S STONE? WHO GOT RID OF RIDDLE? WHO SAVED BOTH YOUR SKINS FROM THE DEMENTORS?”

Harry isn’t wrong. He’s not. He has every right to be furious with how this whole situation has been handled.

“WHO HAD TO GET PAST DRAGONS AND SPHINXES AND EVERY OTHER FOUL THING LAST YEAR? WHO SAW HIM COME BACK? WHO HAD TO ESCAPE FROM HIM? ME!

“BUT WHY SHOULD I KNOW WHAT’S GOING ON? WHY SHOULD ANYONE BOTHER TO TELL ME WHAT’S BEEN HAPPENING?”

All this time Ron and Hermione have been at Headquarters, Harry has been stealing newspapers and sneaking around to overhear the news broadcast to try and find out anything going on. Hermione tries to calm Harry down, saying that she understands, that she would be just as angry if she was in the same situation. It diffuses things a bit, although Harry is still not happy. He asks where the heck they are, and they tell him that it is the headquarters of the Order of the Phoenix, a secret society led by Dumbledore that fought Voldemort the last time he came to power. They have only met about twenty members, but they are pretty sure there are more of them.

Harry doesn’t really care about the members of the Order though. He wants to know about Voldemort. What has he been doing? Where is he now? Ron and Hermione don’t know, since they are kept from the meetings, but Fred and George have invented a thing called Extendable Ears which has helped them eavesdrop a bit. Mrs. Weasley was not happy when she found out. The Order members have been keeping tabs on Death Eaters that they know about, have been trying to recruit more members, and also have been on “guard duty” for something. That something would be Harry, by the way.

But it’s not just meetings. Since the kids aren’t allowed in the meetings, they have been spending most of their time doing other things.

“We have,” said Hermione quickly. “We’ve been decontaminating this house, it’s been empty for ages and stuff’s been breeding in here. We’ve managed to clean out the kitchen and most of the bedrooms, and I think we’re doing the drawing room tomo — AARGH!”

She is interrupted by Fred and George, who have Apparated into the room, and we’ll get to them in a minute, but I just have to say — I don’t want to be in a house that has to be “decontaminated” because things have been “breeding” in it. That makes my skin crawl. UUUUUGGGGGHHHHHH!!!

So Fred and George. They just got their Apparation license and have been popping all over the house just because they can. Sounds just like the twins! They have brought one of their Extendable Ears to try and hear what’s going on in the meeting downstairs. It’s a pretty major meeting — Snape is there. Ginny arrives and tells them that it won’t work, because they have put an Imperturbable Charm on the door. So Snape is giving a top secret report. Bill has transferred from his job in Egypt to be local and help. He’s also apparently spending some time with Fleur Delacour. Charlie is also helping with the Order, although he is still in Romania, trying to bring more foreign wizards to their cause.

And then there’s Percy.

Percy has had a falling out with his family. It started when he was promoted at work, which was odd because he actually got in a lot of trouble with the whole Crouch situation. Now Percy is the Junior Assistant to the Minister of Magic himself. And the Minister . . . well, Fudge is not just still in denial about Voldemort being back, he has convinced others that Dumbledore is just trying to stir up trouble. Mr. Weasley thinks that Percy was only given the job because Fudge wanted him to spy on their family. Percy did not take that well at all.

“He went completely berserk. He said — well, he said loads of terrible stuff. He said he’s been having to struggle against Dad’s lousy reputation ever since he joined the Ministry and that Dad’s got no ambition and that’s why we’ve always been — you know — not had a lot of money, I mean –”

“What?” said Harry in disbelief, as Ginny made a noise like an angry cat.

“I know,” said Ron in a low voice. “And it got worse. He said Dad was an idiot to run around with Dumbledore, that Dumbledore was heading for big trouble and Dad was going to go down with him, and that he — Percy — knew where his loyalty lay and it was with the Ministry. And if Mum and Dad were going to become traitors to the Ministry he was going to make sure everyone knew he didn’t belong to our family anymore. And he packed his bags the same night and left. He’s living here in London now.”

This was really shocking to me. The Weasleys always seemed like such a tight knit bunch, and now there has been this schism in the family. It doesn’t seem possible. Here’s the other part: Percy doesn’t believe anything Harry says about Voldemort either. The Daily Prophet has been mentioning Harry several times each issue, not full articles, but little jokes here and there. Building on the rumors Rita Skeeter started. That Harry is crazy. He is looking for attention. He wants to be hero worshiped. None of which is true, of course, but a good portion of the wizarding world believes it.

It’s all pretty sobering, and Harry really wants to change the subject. They tell him about the house-elf, Kreacher, who is very strange. They also try to overhear the witches and wizards in the hall, but they don’t hear much. As they gather in the kitchen, there is a loud crash where Tonks knocked over the umbrella stand. At once, the mothy curtains from before blow apart and show a picture of an old woman who is shrieking at the top of her lungs.

“Filth! Scum! By-products of dirt and vileness! Half-breeds, mutants, freaks, begone from this place! How dare you befoul the house of my fathers –“

A man runs out and starts arguing with the portrait, finally pulling the curtains closed with Lupin’s help. It’s Sirius, who greets Harry and tells him that the woman in the portrait is his mother.

The chapter ends there, a bit abruptly, so we’ll have to see what happens next. See you next time for chapter 5!