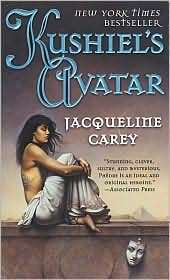 Genre: Fantasy, Romance (bordering on Erotica, just as a warning)

Blurb: The land of Terre d’Ange is a place of unsurpassed beauty and grace. It’s inhabited by the race that rose from the seed of angels, and they live by one simple rule: Love as thou wilt.

Phèdre nó Delaunay was sold into indentured servitude as a child. Her bond was purchased by a nobleman who recognized that she was pricked by Kushiel’s dart, chosen to forever experience pain and pleasure as one. Phèdre’s path has been strange and dangerous. She has lain with princes and pirate kings, battled a wicked temptress, and saved two nations. Through it all, the devoted swordsman Joscelin has been at her side, following the central precept of the angel Cassiel: Protect and serve.

But Phèdre’s plans will put his pledge to the test, for she has never forgotten her childhood friend Hyacinthe. She has spent ten long years searching for the key to free him from his eternal indenture to the Master of Straights, a bargain with the gods to save Phèdre and a nation. The search will take Phèdre and Joscelin across the world and down a fabled river to a forgotten land … and to a power so intense and mysterious, none dare speak its name.

Review: I did it! I finally finished Phédre’s Trilogy! That’s 2395 pages of amazingly beautiful writing right there. This last installment of the trilogy doesn’t disappoint, although it did start to drag a bit in parts. That might just be because I was so anxious to finish it.

I will include in this review, as I have in others, a few warnings. There are some very explicit sex scenes in this series, so if that isn’t your thing, you may want to pass. Also, this book in particular has some pretty gruesome torture/abuse scenes in it that you may want/need to skip.

I only have a few complaints. First one is with our main character, Phédre. This is something that does happen throughout the series, so it’s not just this book, but EVERYONE is always completely enamored with her. And I get it. She’s beautiful and a rarity, having been touched by a god. It was occasionally a little much. The only other thing that bugged me at all, and this may have just been me, but I got confused with some of the locations they were going to. There were a LOT of them. This book goes far abroad in comparison to the previous two, and it was sometimes hard to keep all the new places straight.

That said, the world building in these books are amazing. Carey is such a visual writer with such a poetic style that it is easy to feel like you are there in the story. It is a truly immersive experience. While it got a little confusing at times, it was also really interesting to explore new parts of this world that she has created. It is loosely based on Europe, so this book was going more into the Middle East. A big cultural difference for our characters to navigate.

This book also brought back one of my favorite characters in the whole series, Hyacinthe. I was so glad to see the resolution of his story! I also really enjoyed Imriel’s character and, as he seems to be the focal point of the next trilogy, I might look into reading those one day. Not right now, of course, but they are definitely on my TBR. 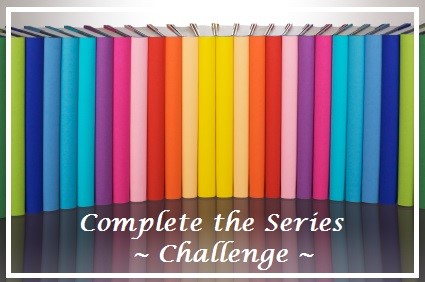