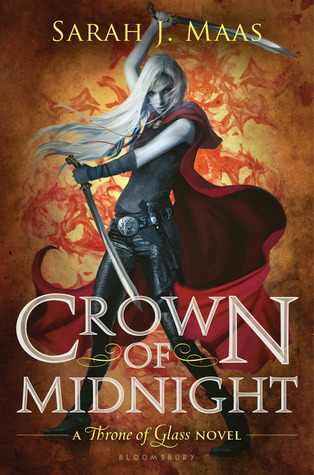 Blurb: “A line that should never be crossed is about to be breached.

It puts this entire castle in jeopardy—and the life of your friend.”

From the throne of glass rules a king with a fist of iron and a soul as black as pitch. Assassin Celaena Sardothien won a brutal contest to become his Champion. Yet Celaena is far from loyal to the crown. She hides her secret vigilantly; she knows that the man she serves is bent on evil.

Keeping up the deadly charade becomes increasingly difficult when Celaena realizes she is not the only one seeking justice. As she tries to untangle the mysteries buried deep within the glass castle, her closest relationships suffer. It seems no one is above questioning her allegiances—not the Crown Prince Dorian; not Chaol, the Captain of the Guard; not even her best friend, Nehemia, a foreign princess with a rebel heart.

Then one terrible night, the secrets they have all been keeping lead to an unspeakable tragedy. As Celaena’s world shatters, she will be forced to give up the very thing most precious to her and decide once and for all where her true loyalties lie… and whom she is ultimately willing to fight for.

Review: Slight spoilers for book one, because it’s hard to avoid them at this point.

I love when reading the first book of the series and thinking that the story showed promise, and then reading the second book and being extremely satisfied. This was a great book two! It followed up on the events of book one (particularly the tournament in which Celaena becomes the King’s Champion) and added whole new levels of excitement and intrigue.

Celaena is such a great heroine. She is feisty, doesn’t take crap from anyone, but is still deeply, deeply flawed. And she knows it. The final reveal at the end of the book was not necessarily a surprise (I had my suspicions), but it was still so satisfying to see the evil powers confronted the way that they were. I won’t say more, or else I’ll really spoil things. It was a great finale for the second book, but things are definitely not tied up neatly. So much is happening, threatening Celaena’s relationships/friendships with both Dorian and Chaol, and testing Chaol’s loyalty and Dorian’s sanity.

And yes, there is a love triangle a bit, which can sometimes annoy me, but this one was done nicely. It didn’t bother me.

This book was hard to put down. I had to know the next steps. Has Celaena turned loyal to the king? Or is she playing her own game? What is going on with the magic in Adarlan? Who are these rebels? All things we need to know!