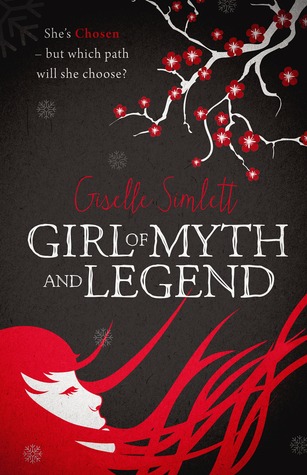 Title: Girl of Myth and Legend

Blurb: A girl with a past she tries to forget, and a future she can’t even imagine.

Leonie Woodville wants to live an unremarkable life. She wants routine, she wants repetition, she wants predictability. So when she explodes in a blaze of light one morning on the way to her college, it’s enough to put a real crimp in her day.

And things only get weirder…

Leonie learns from her father that she is last of the Pulsar, a phenomenally powerful member of a magical species called the Chosen. It will be her sole duty to protect the Imperium, a governing hierarchy, from all enemies, and to exceed the reputation of the Pulsar before her. So – no pressure there, then.

Leonie is swept away from her rigorous normality and taken to a world of magic. There, she is forced into a ceremony to join her soul to a guardian, Korren, who is both incredibly handsome and intensely troubled, a relationship for which ‘it’s complicated’ just really doesn’t cut it.

But Leonie is soon to learn that this ancient world is no paradise. With violent dissidents intent to overthrow the Imperium, and dark entities with their own agenda, she and Korren find themselves caught in a war where they will have to overcome their differences if they are to survive.

This is another book where the story suffers because the main character is kind of insufferable. In that way, it reminded me of The Magicians by Lev Grossman, where the main character made me want to throw the book across the room. In Girl of Myth and Legend, Leonie comes across as ungrateful, rude, and disrespectful, right from the beginning. She is extremely disrespectful to her father, not even listening to him when she has her first magical experience, even though he obviously knows more than she does. We’re never really given a reason why she acts like this. As the story progresses, it would make sense that she was angry that her father hid the world of the Chosen from her, but she behaves this way before anything even happens. There’s no explanation for it and it made me very unsympathetic to her as a character from the very beginning.

I think the author was trying to make her funny and sarcastic, but it didn’t work. Leonie gets a bit better by the end of the story, but that’s only once things get so far out of her control, she needs to rely on people to save her skin. I have a very hard time enjoying a story when I really wouldn’t be too fussed if they off the main character. I need to care about what happens to them, to be invested in the outcome of their circumstances. With Leonie, I really didn’t care.

Now Korren was an interesting character. Actually, I think if the story was told solely from his point of view, instead of switching back and forth from him and Leonie, I might have enjoyed the book better. Sure, Korren is also a bit of a grump, but he’s also part of an enslaved race made to serve the Chosen for eternity with no means of escape. It makes SENSE that he’s disgruntled, and even so, he’s never overly annoying about it.

The world building in this book was interesting and I wouldn’t mind seeing more of it in books to come, especially where the kytaen are concerned (that’s what Korren is, for those who haven’t read this). I felt like we only got the tip of the iceberg with this – we never really got to see the bulk of the Chosen’s world before all the trouble started, so I would be curious to see where this all was going. It also sounded like Korren really wanted to lead some sort of kytaen rebellion, which also sounds promising.

It would be interesting to see if later books could turn me around on this, just like Lev Grossman did. His character, Quentin, royally pissed me off in the first book, but got a lot better in the latter books of the series, to where I really enjoyed them. I don’t know if the good parts in Girl of Myth and Legend would outweigh Leonie’s attitude enough for me to continue, although like I said, she did get better by the end. Grew up a little. So maybe this is something to keep on my radar, but nothing I would run out right away and get. As of right now, there are no other books listed on GoodReads for this author, but who knows. Maybe someday.