Home › Month in Review › MONTH(S) IN REVIEW: October and November

MONTH(S) IN REVIEW: October and November

Since October and November were both very . . . we’ll say sparce . . . in reading this year, there didn’t seem a point to have a post for each month. It seemed kind of silly not to just combine them and move on.

After reading 10 books in the month of September, it feels like a step backwards to have only read 5 books across both October and November. Chalking it up to the depression and my increased work schedule. Like I said, best to just acknowledge that it wasn’t great and move on. 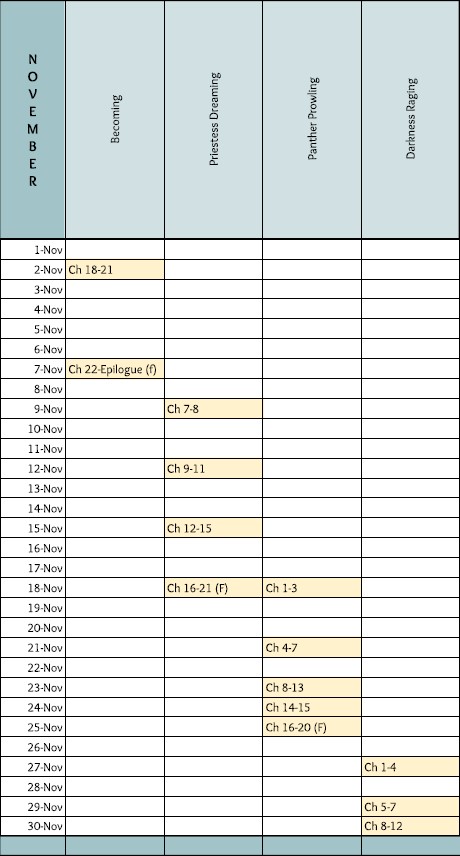 A lot of empty space. It looks like I was trying to put it back together in November and, so far, December has gone fairly well. Hopefully that continues.

GoodReads Reading Challenge: My goal for 2022 was to read 60 books and as of right now, I am sitting at 58. Unless December completely falls apart, I should easily do this and then some.

Complete the Series Challenge: I actually feel pretty good about this one, which I didn’t for a while. I have 44 series on my list that need to be completed (you can see the complete list here). My goal was to complete six of them this year and to finish any new series that I started. In October, I finished the Dark Artifices series by Cassandra Clare, which is officially my fourth series finished this year (previously had finished the Fire and Thorns series by Rae Carson, the Miss Peregrine’s series by Ransom Riggs, and the Seven Realms series by Cinda Williams Chima). While I didn’t read much over these two months, I did keep consistently reading the Otherworld/Sisters of the Moon series by Yasmine Galenorn. I have four books left to finish in December (spoiler alert: I already finished one of them). Since they are rather short, this should be doable, which would be my fifth series. I am also trying to read the two Carls books by Hank Green. I had only read the first one of this duology, so if I can finish these two books in December as well, that will officially be my sixth series. So it’s possible! I’m still in the running!

Yeah, it wasn’t great, but I’m getting back on track. I only had six posts in October and none in November at all. Some very brief stats:

And that’s all she wrote! And by she, I mean me. Like I said in my update post last week, I was just in a really weird head space these past two months. I think things are getting a bit better, which is good. I am feeling a bit more focused and a bit less overwhelmed, which always helps. I’m also trying to take better care of myself, which I had definitely let slide. For the blog, I at least want to keep up with Tuesday and Wednesday posts, just to stay in the habit and let everyone know how things are going. I also really need to catch up on a bunch of reviews. Those will be coming, I promise.

But yeah, that was my October and November. I had said on my September review post that I knew things would probably taper off because of being busy and that I wouldn’t let that get to me too much. I think I let things affect me more than I realized and more than I should of, but that’s why I think it’s good to just take note of how things went and then move forward. December will be better.

I’m also starting to look ahead to next year and plan out what I want to do here on the blog. If there is anything you would like me to consider, please let me know. I always love suggestions and new ideas!