Catching up on some more reviews that I have stacked up. This one was my return the Star Wars universe. Let’s check it out! 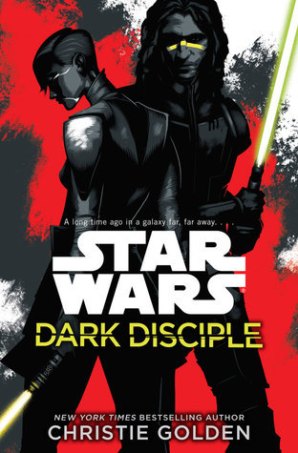 Blurb: The only way to bring down the dark side’s most dangerous warrior may be for Jedi and Sith to join forces.

In the war for control of the galaxy between the armies of the dark side and the Republic, former Jedi Master turned ruthless Sith Lord Count Dooku has grown ever more brutal in his tactics. Despite the powers of the Jedi and the military prowess of their clone army, the sheer number of fatalities is taking a terrible toll. And when Dooku orders the massacre of a flotilla of helpless refugees, the Jedi Council feels it has no choice but to take drastic action: targeting the man responsible for so many war atrocities, Count Dooku himself.

But the ever-elusive Dooku is dangerous prey for even the most skilled hunter. So the Council makes the bold decision to bring both sides of the Force’s power to bear—pairing brash Jedi Knight Quinlan Vos with infamous one-time Sith acolyte Asajj Ventress. Though Jedi distrust for the cunning killer who once served at Dooku’s side still runs deep, Ventress’s hatred for her former master runs deeper. She’s more than willing to lend her copious talents as a bounty hunter—and assassin—to Vos’s quest.

Together, Ventress and Vos are the best hope for eliminating Dooku—as long as the emerging feelings between them don’t compromise their mission. But Ventress is determined to have her retribution and at last let go of her dark Sith past. Balancing the complicated emotions she feels for Vos with the fury of her warrior’s spirit, she resolves to claim victory on all fronts—a vow that will be mercilessly tested by her deadly enemy . . . and her own doubt.

This was delightful! I’ve been enjoying my dip into Star Wars novels this year. This one was fun because it centered on characters that I was not familiar with at all. Sure, there are a few familiar faces: Obi-Wan makes a few appearances, as does Yoda and Anakin Skywalker. The main baddie is Count Dooku, who was a villain in the Clone Wars. But mostly the story centers around Vos and Ventress, an unlikely pair who have to work together to try and save the galaxy.

This is the novel’s greatest strength – these two characters. Vos is a very fun character, a Jedi who grew up in the Jedi Temple, confident of his life plan, never questioning anything until he meets Ventress. As for Ventress, she is a fascinating character. She has been an acolyte of both sides of the Force and has decided to strike out to be her own person. When they come together, it is hate at first sight that turns into opposites attracting – big time. It makes it all the more sad when they finally meet their downfall.

This book foreshadows a lot of events leading into Revenge of the Sith as well as gives more details to both the Clone Wars movie and TV show (which I never saw, but heard good things about). It also makes the Star Wars world seem even more rich and exciting.