Just as a note, we will probably be staying in Sweet Valley for a while. I like switching off to The Baby-Sitters Club but it’s getting really hard to find some of those books, whereas Sweet Valley High books, at least the last several I’ve looked for, are currently free to read on Kindle Unlimited. Once I can get back out to some of the used bookstores around here, I might be able to head back to Stoneybrook, but we’ll have to wait and see.

Anywho, let’s get on with it! 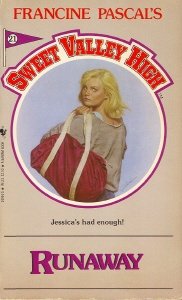 Blurb: Jessica’s had it with Sweet Valley…

Jessica Wakefield is sick and tired of taking second place to her twin sister, Elizabeth. Everyone adores Elizabeth; she’s kind and loving and generous. But Jessica can’t seem to do anything right.

Then Jessica meets handsome, sensitive Nicky Shepard, who feels the same way she does. Nicky is running away to San Francisco and wants Jessica to join him. At first she doesn’t take him seriously. But when things reach the breaking point at home, Jessica starts to see that she might be better off if she left Sweet Valley – forever!

This is one of the few books so far that I’ve read that I don’t really remember anything about. It’s also only book so far that has made me feel sorry for Jessica in any way because, boy oh boy, are people really giving her a hard time. This is weird though, because I don’t remember her family ever treating her like this in any other book, except for part of the previous book to set up the plot for this one.

So what are some of the issues? One of the first ones in this book is that their brother Steven is home from college still reeling from his girlfriend’s death. Of course he is – he really loved Tricia and had to watch her waste away from leukemia. Both twins want to do something to help Steven and they decide to invite him to a party thrown by Jessica’s friend, Cara Walker. Jessica makes the invitation and Steven blows up. It doesn’t help that Cara is the one that Jessica had been trying to set Steven up with for a while, so Steven sees this as Jessica foisting her friend on him once again while he is still grieving. Both the Wakefield parents jump all over Jessica for being so insensitive, but back down when Elizabeth says that it had been her idea too. They even think that since Elizabeth came up with it, it might be a good idea.

So yeah, I get why Jessica might be a bit upset about that. After this incident, there are several others, either where Jessica is ignored or worse and Elizabeth is shown as the perfect paragon of daughterhood. All of this wears down Jessica quite a bit and, yes, I do feel really bad for her. She starts feeling like her family would be glad if she was gone, that she is doing nothing but messing things up for them. Which is really weird, because in pretty much every other book, Jessica does not seem to care at all what her family thinks. Especially Liz! And I’ve never seen her family act this way towards her – ever! It’s like they decided to be terrible for a book and then go back to being perfect again. It’s weird.

So when Jessica meets Nicky, who is another one of the kids who “hangs out with the wrong crowd,” she is instantly drawn to him. Nicky is also having problems at home, where he feels like a burden and that he can never be good enough. Jessica feels like she has found a kindred spirit. It doesn’t hurt that he’s also very, very good looking.

(Is anyone in Sweet Valley ugly? Anyone at all? Where are my plain girls at!)

Nicky decides that he is going to leave home, move to San Francisco, and work with a friend of his. He invites Jessica to come with him and after a few days decides to do so. She goes to the bus station alone (I guess Nicky went up first to get things set up for them) after leaving a note behind telling her family that she was leaving. The note falls behind a dresser, but Liz can tell Jess is gone because her room is actually clean. She and Steve head to the bus station, miss Jessica’s bus, but drive up to the next bus stop and have a big reconciling moment. After this, everything is fine and everyone can go back to acting the way they always have.

The side plot for this one involves Ricky Capaldo, whose parents are divorced. His dad is a dead beat who moved far away and refuses to pay child support, so when his paternal grandparents come over from Italy to try to step in and help, Ricky’s mother won’t let them see Ricky or his sister. It’s all very sad. Ned Wakefield is representing the grandparents in court and for some reason Elizabeth is covering the case for the city paper. Ricky finds out about the article and is rightfully angry about it. Elizabeth helps Ned make the case that the kids involved need all the love they can get, which is why keeping the grandparents away from their grandkids is wrong. Which I guess I can understand in someways, but I also see this from the mother’s perspective, having to now be forced to deal with her ex-in laws. The family comes to an agreement and the case is dismissed. Ricky is happy again and he and Liz make up.

Set up for the next book: Bill Chase and DeeDee Gordon. Bill is the surfer dude turned wannabe actor from a few books ago and DeeDee is his girlfriend. They have been seen a few times in this book being really tense and having a few arguments. I guess we will find out what’s going on in the next book, Too Much in Love!