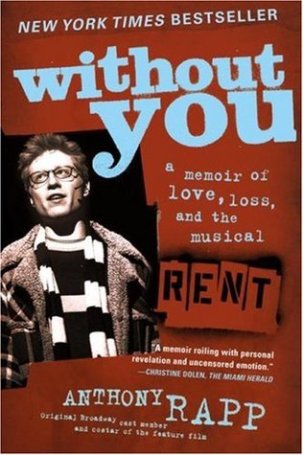 Title: Without You: A Memoir of Love, Loss, and the Musical RENT

Blurb: Anthony Rapp captures the passion and grit unique to the theatre world as he recounts his life-changing experience in the original cast of the Pulitzer Prize-winning musical Rent.

Anthony had a special feeling about Jonathan Larson’s rock musical from his first audition, so he was thrilled when he landed a starring role as the filmmaker Mark Cohen. With his mom’s cancer in remission and a reason to quit his newly acquired job at Starbucks, his life was looking up.

When Rent opened to thunderous acclaim off Broadway, Rapp and his fellow cast members knew that something truly extraordinary had taken shape. But even as friends and family were celebrating the show’s success, they were also mourning Jonathan Larson’s sudden death from an aortic aneurysm. By the time Rent made its triumphant jump to Broadway, Larson had posthumously won the 1996 Pulitzer Prize. When Anthony’s mom began to lose her battle with cancer, he struggled to balance the demands of life in the theatre with his responsibility to his family. Here, Anthony recounts the show’s magnificent success and his overwhelming loss. He also shares his first experiences discovering his sexuality, the tension it created with his mother, and his struggle into adulthood to gain her acceptance.

Variously marked by fledgling love and devastating loss, piercing frustration and powerful enlightenment, Without You charts the course of Rapp’s exhilarating journey with the cast and crew of Rent as well as the intimacies of his personal life behind the curtain.

Review: Yo, where my fellow RENTheads at?

I was surprised that I had never reviewed this book on my blog before and since I just re-read it, I figured it was time. I love this book so much. I am a big fan of theater, as you know, and a big fan of RENT in particular. As such, I am also a big fan of Anthony Rapp. One of the highlights of my theater life was getting to see him and Adam Pascal (the original Mark and Roger) when they joined the national tour. I even got his autograph! 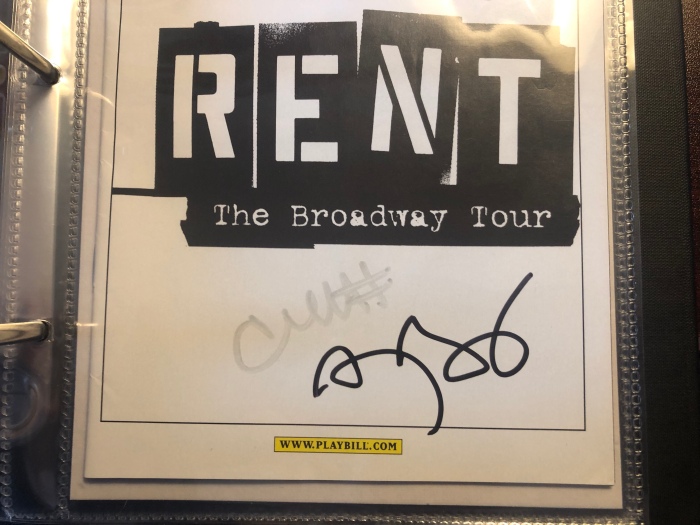 I knew he was a great actor and a great singer, but had no idea he was such a great writer too. This book is heart wrenching and brutally honest. That’s one thing that I respect Rapp for here – he admits that there were plenty of times where he really screwed things up. To be fair, he was dealing with a lot. His mother’s battle with cancer. The sudden brilliant success of RENT, followed by the devastating loss of the show’s creator, Jonathan Larson. It would be enough to break anyone, but Rapp took it and poured all his emotions into his work. He’s a very strong person, even if he might disagree with that, and I admire him greatly for it.

This book is a must read for any theater fan, especially if you love RENT. Even if you aren’t a theater fan, it’s still a very interesting read, a sneak peak into a very exciting world.