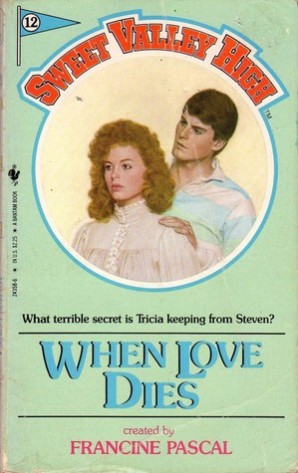 Blurb: The Wakefield twins’ older brother, Steven, is heartbroken. His girlfriend, Tricia Martin, no longer seems interested in him. She breaks their dates and doesn’t return his calls. Steven can’t understand why Tricia’s feelings have changed so suddenly.

Jessica is thrilled that Steven isn’t dating Tricia anymore. She sees it as the perfect opportunity to pair him with her best friend, Cara Walker. Elizabeth, Jessica’s twin, thinks that scheming, gossipy Cara is all wrong for Steven. She’s determined to find out the reason for Tricia’s strange behavior – and horrified when she discovers the awful truth.

This all starts with the fact that Steven, the Wakefield brother, is extremely mopey because his girlfriend, Tricia Martin, has been acting super distant. He’s pretty sure that she wants to break up, which is the last thing he wants to hear because he is absolutely head over heels in love with her. Now, we’ve already heard about Tricia’s family. They’re not the best. Her sister is always in trouble. Her dad is known for being a belligerent alcoholic.

Jessica is so happy by this turn of events, as she has always thought that Steven was too good for Tricia. Elizabeth accuses her of only wanting to be right and not actually caring about Steven’s feelings. Which is totally true, let’s be honest. Jessica doesn’t really care about what’s going on, only the fact that it’s humiliating to have to explain that her brother is dating someone like Tricia. Classicism at its finest.

When Steve goes over to Tricia’s house, he finds her packing up to go away for the weekend. She won’t tell him where she’s going, so Steve jumps to the conclusion that she is running off with another guy. Because of course he does. Granted, Tricia does nothing to try and persuade him otherwise, but she’s very upset when he storms out. We find out that she’s not sneaking around or doing anything nefarious at all. She has leukemia, and maybe six months to live. She thinks that it’s better for Steven to leave her and be angry than to have to suffer through her illness and death.

We also learn why Tricia’s family is the way it is. Her mother died of leukemia when Tricia was nine years old. Her father never got over the loss of his wife and turned to alcohol to deal with it. She doesn’t specifically say that’s what turned Betsy wild, but I’m assuming that between losing her mom, and essentially losing her dad too, it didn’t help.

Jessica, being the sweet person she is, has decided that the best way to help her brother is to throw another girl at him. Specifically, one of her best friends, Cara Walker. I’ve never particularly liked Cara. She’s gossipy and shallow, much like Jessica herself, and even says that she is looking forward to being Steve’s girlfriend in order to go to cool college parties. In other news, we learn of a new family, a very rich one, that is moving to town – the Morrows. We’ll get their tragic story later.

Oh, and Jessica hears that a local television celebrity, Jeremy Frank, is in the hospital because he broke his leg, so she gets the great idea to volunteer as a candy striper in order to get a chance to meet him. She even convinces Liz to go along with her. For her first day, Jess gets stuck in the maternity ward dealing with dirty diaper removal and lying to new mothers about how cute their babies are. And here’s the kicker – Liz gets to meet Jeremy! When Jess acts all jealous, Liz sees right through her and realizes that the only reason Jess wanted in the hospital in the first place was to see a celebrity.

Elizabeth also meets an intern named Carl, who will become very important in the next book. She also briefly sees Tricia Martin, who mumbles hello and leaves very quickly.

Jessica sneaks up to Jeremy’s room – and proceeds to humiliate herself. Serves her right. She’s getting on my nerves even more than usual in this book. Later, she berates Steve for not wanting to go out with Cara and then makes up stories about Tricia. Cara throws a small party as a way to get Steve to talk to her, even though Steve isn’t interested at ALL. Why isn’t anyone respecting his privacy and his feelings?  In any case, Cara tells Steve that she saw Tricia hanging all over some guy (which I’m guessing is a lie) and Steve falls for it, immediately rebounding with Cara. This isn’t really fair to Cara either, since he’s basically using her at this point, but she’s also the one who set this up, so I guess she’s using him too. Ugh.

Liz sees Tricia the next day at school and asks her why she ran away at the hospital. Tricia tells her she was visiting a friend, but that the friend had already checked out (since Liz mentions that she’s a candy striper and might know this “friend”). We all know that the “friend” is actually Tricia herself. Jessica and Cara show up and casually mention how much fun Steve and Cara had at the party. Tricia says to herself that it’s better this way, that Steve has moved on and has someone else in his life and won’t have to worry about her anymore. She has no idea that he’s still madly in love with her.

Luckily for us all, Elizabeth is no idiot (she just acts like one sometimes in regards to her sister). She knows something is going on with Tricia and wants to find out. As luck would have it, she doesn’t have to do any sleuthing at all – she is assigned to Tricia’s room the next time Tricia is in the hospital. Tricia confesses about her diagnosis and makes Liz promise to not tell Steve about any of this until after she dies. She wants him to know she still loved him, but only after he has been able to move on with his life. She doesn’t want to hurt him, even though she kind of already has. She is positive that it will be easier for him to deal with this way.

Liz also wants to get back at Jessica for acting like a fool around Jeremy at the hospital. Together, Liz and Jeremy cook up a plan to get Jessica back, which starts with Jeremy giving her a bunch of roses that were delivered to his room. It works because Jessica is about as deep as a puddle and even though she has caused Jeremy nothing but grief, she doesn’t question the roses at all, but instead takes them as proof that Jeremy must be in love with her. I will never know what it is like to have this much confidence. NEVER.

Back at school, Liz can’t stop thinking about Tricia. The rumors that Cara started have spread all over and now everyone thinks Tricia has another guy and cheated on Steve. It’s really gross. Keeping the secret is really tearing Liz up though and she finally confesses everything to Mr. Collins, the school newspaper adviser and Robert Redford lookalike. As always, Mr. Collins calms Liz down and helps her understand what she needs to do. We should all have a Mr. Collins in our lives. The final decision: Liz needs to tell Steve the truth about what’s going on.

Back to the Jessica-Jeremy situation. The finale of the ruse is here! Jessica is hoping that Jeremy might ask her out, or ask her to be on his TV show, but instead he asks her to marry him! This (rightfully) freaks Jessica out and she runs out the door. Later, she has second thoughts, not about marriage but being engaged sounds nice, but when she tells him that, he basically laughs her out of the room, saying it was a joke. If it was anyone else but Jessica, I would think it was cruel, but it is Jessica, and she kind of deserves it.

Steve takes Cara to one of those college parties she was so excited about, but he has a lousy time. Just lousy. Cara acts like a terrible person, because she is one, very callous about how Steve feels. She also tells him that she thinks Tricia dropped out of school and that she considered herself to be Steve’s girlfriend now. That is just enough to push Steve over the edge. He explodes, saying that he could never just replace Tricia like that because he really loved her. Bam! Take that, Cara! When Steve gets home, Liz immediately tells him everything she knows about Tricia. Steve rushes out to Tricia’s house, where she tries to tell him she has a date arriving any minute, but Steve just tells her that he knows the truth.

Also technically the truth – the story Cara told Steve about Tricia hanging all over some guy. Except it was because Tricia was at the drug store picking up some medicine and almost fainted. A man at the store caught her and helped her back to her car.

Whatever. Steven and Tricia are back together again, for as long as they have together. So it’s a happy ending? A sad ending? A tragically happy ending?

The book ends with the set up for the next book, which to be honest is one of my favorites in the series. I still remember it, to this day. Elizabeth is walking back to her car when she is suddenly caught and drugged by Carl the Intern, who tells her that they will be together forever. What will happen? We’ll find out next time!