Home › Books I've Read › Book Review: Where I End and You Begin

Book Review: Where I End and You Begin 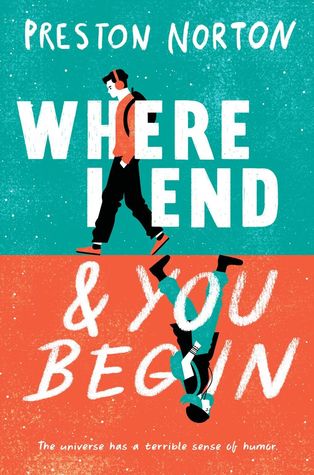 Title: Where I End and You Begin

Blurb: Ezra Slevin is an anxious, neurotic insomniac who spends his nights questioning his place in the universe and his days obsessing over Imogen, a nerdy girl with gigantic eyebrows and a heart of gold.

For weeks, Ezra has been working up the courage to invite Imogen to prom. The only problem is Imogen’s protective best friend, Wynonna Jones. Wynonna has blue hair, jams to ’80s rock, and has made a career out of tormenting Ezra for as long as he can remember.

Then, on the night of a total solar eclipse, something strange happens to Ezra and Wynonna–and they wake up in each other’s bodies. Not only that, they begin randomly swapping back and forth every day! Ezra soon discovers Wynonna’s huge crush on his best friend, Holden, a five-foot-nothing girl magnet with anger management problems. With no end to their curse in sight, Ezra makes Wynonna a proposition: while swapping bodies, he will help her win Holden’s heart…but only if she helps him woo Imogen.

Forming an uneasy alliance, Ezra and Wynonna embark on a collision course of mistaken identity, hurt feelings, embarassing bodily functions, and a positively byzantine production of Twelfth Night. Ezra wishes he could be more like Wynonna’s badass version of Ezra–but he also realizes he feels more like himself while being Wynonna than he has in a long time…

Wildly entertaining and deeply heartfelt, Where I End and You Begin is a brilliant, unapologetic exploration of what it means to be your best self.

Review: Y’all, this book was absolutely delightful. I love books that are quirky and funny, but also have a really good, heartfelt message.

It’s obviously not an original idea – there are several Freaky Friday movies after all. I really enjoyed how they took two people who were so different, who completely hated each other, and put them in this situation. Most notably: one is a boy and one is a girl. The body swapping doesn’t happen just one brief time. It happens over and over for MONTHS. That means, you guessed it, Ezra has to figure out what a period is and Wynonna has to figure out what to do with a penis. That also doesn’t take into account the fact that they are both best friends with the other one’s crush, so there is a lot of awkwardness as they have to try and act like everything is completely normal.

Ezra is a really sweet character. Shy and a little goofy, being stuck in Wynonna’s body forces him to break out of his shell a little bit. It was easy for him to hate Wynonna, but living her life makes him realize that she is the way she is for a reason. Her family life is not great and her attitude has been a way to put up walls to protect herself from hurt. I also really enjoyed Ezra’s mixed-up attempts to patch things up with Wynonna and her estranged father.

In the end they all manage to end up friends: Ezra, Wynonna, Imogen and Holden, as well as perform in the Shakespeare play Twelfth Night as part of a detention punishment at school. It’s also particularly amusing when Ezra and Wynonna switch right before the performance starts: after learning the lines of the other person all school year. Shenanigans!

The big takeaway from this book though is, to borrow a turn of phrase, that you never really know a person until you walk in their shoes. Ezra began the school year thinking that Wynonna was terrible, and vice versa. They ended the year as friends after fully realizing why they were the way they were, and that maybe they should have just given each other a chance the first time. The reason that the body swapping started was very poignant and well done.