Harry Potter and the Chamber of Secrets – Chapter 8 (#PotterheadReadAlong19) 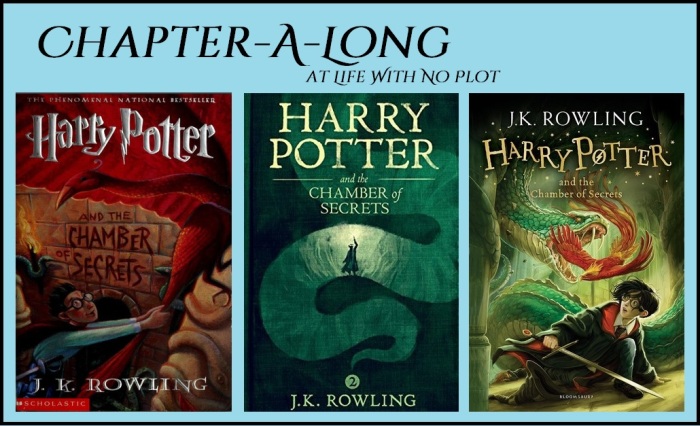 In Chapter 8, we learn the woes of improper decapitation, learn something new about the Hogwarts caretaker, attend a death-day party, and see the first victim of the mysterious voice Harry heard. Let’s go!

(I actually wrote this yesterday, or most of it, and saved it in my drafts folder to finish when I got home. Which I didn’t do. Oh well. Enjoy it today!)

Oh, Nearly-Headless Nick. I love this character. The chapter starts off with Harry coming from Quidditch practice and running into Nick, lamenting the fact that once again, he has been denied membership to the Headless Hunt because he is not completely headless.

“Half an inch of skin and sinew holding my neck on, Harry! Most people would think that’s good and beheaded, but oh, no, it’s not enough for Sir Properly Decapitated-Podmore.”

They are interupted by Mrs. Norris, Filch’s cat, followed closely by Filch himself. Filch is always in a bad mood, but is particularly nasty today. He drags Harry to his office, intending to punish him for something, anything. Fortunately, they are interrupted and Filch runs off to see what the commotion is. While he is gone, Harry sees some papers on his desk for “Kwikspell,” a correspondence course in magic. Looks like Filch isn’t a proper wizard. This is the first, and probably only, time that I feel bad for Filch and see why he might be so unpleasant. You can imagine that, as a squib (although we don’t learn that word until the next chapter), he probably didn’t get treated very well by the rest of the wizarding world (look at how some of them treat Muggleborns, after all). Still, that’s no excuse for being so awful to everyone.

Filch is so flustered when he comes back and sees that Harry saw the Kwikspell course, he lets Harry go without any punishment (yay!). Turns out Nick helped out there, convincing Peeves to drop a heavy cabinet right above Filch’s office. To pay Nick back for helping him (and to make him feel better, since Nick still looks so sad), Harry reluctantly agrees to go to Nick’s Deathday party on Halloween. Apparently that’s a thing for ghosts, celebrating the day you died. I don’t know if I would want to do that, but hey, I’ve also never been dead either.

The party itself does not sound like a good time. Terrible screechy music, rotten food, freezing cold temperatures. We also meet another Hogwarts ghost: Moaning Myrtle, who haunts the girls bathroom. What a lovely place to live, eh? We also get to see the aforementioned Headless Hunt, who crash the party and distract everyone from Nick’s speech. I must say, they seem like jerks. Nick is better off without them, I don’t care how prestidgious an organization it is.

Harry, Ron and Hermione leave the party, hoping to catch the end of the Halloween feast, when Harry hears that spooky voice again. Ron and Hermione don’t hear it at all, but Harry runs off to see if he can find it.

Why in the actual hell are you following this voice, Harry!! Why aren’t you running in the opposite direction as fast as you can!!????!!!

They find that Mrs. Norris has been attacked, hanging from a sconce on the wall, looking for all the world dead. There are also words written on the wall in what looks like blood.

“THE CHAMBER OF SECRETS HAS BEEN OPENED. ENEMIES OF THE HEIR, BEWARE.”

Y’all, the first time I read this book, this is where I was hooked. It sounds cheesy, but it’s true. This was no longer a happy little children’s book. This was DARK! This was CREEPY! I was so excited.

Before they can leave the scene of the crime, the rest of the school arrives, having just left the feast. Draco Malfoy, of course, has to say something nasty, which makes him seem like a suspect perhaps, or at least that maybe he knows more than he should about what’s going on. I love these little throw away clues that Rowling includes. We know now that he was not involved with the Chamber of Secrets at all, but Rowling sure does throw that red herring in there. I love when she does that. It makes it easier to discount in later books when Draco is actually up to something, but we’ve seen him act suspicious in the past and it turned out to be nothing. Such a good bait and switch. Rowling is a master at this.

See you after Chapter 9!