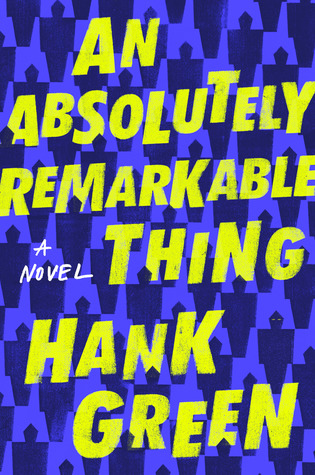 Series: This is the only book so far, but GoodReads shows a book two is planned.

Edition: Hardcover, pre-ordered as soon as I heard about it

Blurb: The Carls just appeared. Coming home from work at three a.m., twenty-three-year-old April May stumbles across a giant sculpture. Delighted by its appearance and craftsmanship–like a ten-foot-tall Transformer wearing a suit of samurai armor–April and her friend Andy make a video with it, which Andy uploads to YouTube. The next day April wakes up to a viral video and a new life. News quickly spreads that there are Carls in dozens of cities around the world–everywhere from Beijing to Buenos Aires–and April, as their first documentarian, finds herself at the center of an intense international media spotlight.

Now April has to deal with the pressure on her relationships, her identity, and her safety that this new position brings, all while being on the front lines of the quest to find out not just what the Carls are, but what they want from us.

Review: First, a disclaimer. I was a huge fan of both Hank and John Green since I found their Vlogbrothers channel on YouTube. I liked their funny videos that made me laugh, their serious videos that made me cry, and everything in between. This drew me in to reading John’s books, which I absolutely loved. So when I heard Hank was also writing a book, I knew I would buy it immediately and that I would love it too, no matter what.

What I’m saying is, I am not the most unbiased reviewer where the Green brothers are concerned.

That said, I thought this book was really, really well done. First off, the Carls are just plain cool. Giant metal beings that just appear across the globe, they are both fascinating and slightly sinister at the same time. You never know exactly what they are or where they came from (until the end, sort of – this book is screaming for a sequel). I don’t want to spoil too much, but there was one instance where something April and her friends did caused the hand to fall off of the Carl in New York. The statues are completely still, but the hand falls off and skitters away AND NO ONE CAN FIND IT. It ran into a restaurant or a club, but then just seemed to disappear. The weirdest bit – the hands on all the other Carls across the world vanished at the same time.

So that’s the gimmick. Let’s talk about our main character. April is very relatable. She had big hopes and plans, but is stuck working in a dead end job she hates. She finds this amazing thing, makes a video that goes viral, and has her entire life upended. She is now a media sensation, the target of both adoration and hatred. We watch her personality change, how she suddenly becomes obsessed with the numbers of hits and followers, of trying to stay relevant in a growing number of people talking about the phenomenon. It does go to her head, and one thing that I liked was that Hank was not afraid to make April a little bit unlikable during part of this time. She becomes very selfish, and that takes its toll on her relationships and friendships.

It made me wonder if this was something that Hank (and John) had to deal with once they started getting some acclaim as YouTubers (it really took off after Hank made a video of a song he wrote anticipating Harry Potter and the Deathly Hallows –  wow, that was a long time ago). If so, it never showed on the outside, but that’s kind of the point. April tries to present herself in a very positive light, no matter what is happening on the inside, so that none of her followers ever really see the real April. What I really liked about this book was how it not only covered the fantastical story about the Carls, but also showed the very real issues of dealing with social media and Internet celebrity culture.

This book is a very unusual book, but I enjoyed it very, very much.