Since I don’t plan on reviewing any of the Otherworld books individually until I finish the series, I actually don’t have a huge backlog of reviews to get out. Isn’t that nice? Although when an author completely and totally breaks your heart . . . it might take you a while to be able to talk about it. Here is my review of Shadowbound by Dianne Sylvan. 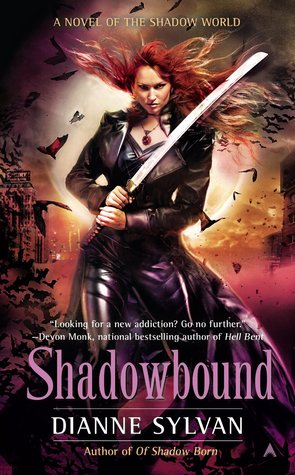 So much happens in this book, it’s really hard to try and synopsisize it (is that a word? it is now!). That’s one of the things I love about this series in general – Sylvan doesn’t pull any punches. She writes a complex, ever-changing story with great characters and just enough snarky, sarcastic humor that it makes things fun.  I have said it before and I’ll say it again – I really dig her take on vampires. There are so many different vampire books and series out there, some done well, some not so much. To me, this is one of the better ones, if not the best. If vampires really existed, this is totally how they would operate.

Side note, my husband calls these my “hot-girl-with-a-sword” books. It’s not an inappropriate title.

This is book five in the series. It just came out back at the end of March and I have been waiting (un)patiently for it to get here for about a year. The story continues with David and Miranda, the Prime and Queen of the Southern U.S., who are still trying to adjust to the events that happened at the end of book four. Namely, David returning from the dead and becoming one of the Thirdborn, the next . . . evolution I guess? . . . of vampire. They are also examining the connection that is forming between their Pair and the other Pairs that are forming the Circle, an elite group of vamps tasked with serving Persephone. And then there’s also Olivia, the recently chose Prime of the Northeast . . . who is the first ever female prime.

AND . . . there’s also an elf named Nico who is trying to help Deven heal his ancient broken soul.

AND AND . . . there’s a group of humans called the Order of the Morningstar who are trying to take the vampires down, who have found a way to become super strong which involves ritually sacrificing Primes.

There are parts of this book that made me laugh out loud and one particular character death that made my cry like a baby. My favorite character is still probably Deven, the Prime of the Western U.S., and my heart just aches for him. This book told much more of his story than other books previously have done and I’m so glad we’re getting to know him a bit more. I just hope he can survive the events at the end of this book into the next one.

I’ve said it before and I’ll say it again – if you like vampires, you MUST read this series. Go directly to the bookstore, do not pass GO, do not collect $200.00. Okay, if someone is handing out $200.00, then take it, but THEN get to the bookstore and use that money to buy this series!