Have you ever finished a book and just said AAAAHHHHHHGHGGH! Yeah. Here’s my review of Embrace the Night by Norah Wilson and Heather Doherty. 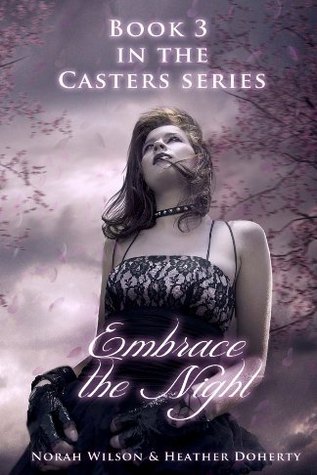 As I suspected, this book focuses more on Brooke, the third of the girls who discovered how to “cast out” from the attic of their dorm at Harvell House (for a definition of “casting out,” see my Enter the Night review). Brooke’s issues mostly have to do with her feeling like an outcast. Her mother has chosen her new husband, a very strict man with whom Brooke doesn’t get along at all, over Brooke and all her potentially embarrassing problems. Brooke’s ex-boyfriend Seth had broken up with her, only to replace her with someone his family would find more appropriate. But it’s the last straw for Brooke when she thinks that Alex and Maryanne have left her out of a big discovery. These are supposed to be her friends, her sisters, the people who accept her for who she is – and they’ve been keeping secrets.

In short, Brooke has a melt down. She goes up to the attic and casts out, leaving her physical body behind and revelling in the freedom of being in her cast form. Except it doesn’t work. She’s still really angry which, as we’ve seen before, does nothing good for her impulse control. She does the one thing that she thinks will teach Alex and Maryanne a lesson – she breaks the window.

Until now, this has been the only way for them to both cast out of their bodies and to return to their bodies. Now they are stuck in cast form with no way to get back. When they are in cast form, they can speak to one another, but no one else can hear them. To make matters worse, the whole town is up in arms about the “Hellers,” hunting down what they think are demons from hell, trying to find anything to take them down permanently.

The girls have limited resources and even fewer allies, most of which they barely trust. Plus, being in their cast form is tiring them slowly, not to mention what’s happening to their physical bodies, which grow weaker and weaker from non-use. They have to figure out a way to get back in, but how?

I love this series, I really do. It’s so so so so good. I liked reading more about Brooke’s character, since before this I really didn’t like her. She seemed very confident to the point of being cocky, but that’s mostly an act to hide how hurt and rejected she usually feels. She’s still not my favorite character, and she still does some pretty bad things, but I understand where she’s coming from more and, as a result, like her a bit better. This whole book is full of suspense and dread – they’re really in trouble now and there’s no way in sight (at least at first) to do anything about it.

I was so frustrated by the end of this book though! I thought for sure that this was a trilogy, that this would be the final conclusion. Nope! There is another book,  which is only listed on the author’s website, called Forever the Night, supposedly coming out Spring of 2014. It doesn’t show up anywhere else, not on GoodReads, not on Amazon for pre-order. I hope this book will be out soon because, holy crap, Embrace the Night ended on a cliffhanger! I need to know what happens! Now! Seriously though, this series is excellent and keeps on getting better. You should definitely give it a read.