This past Saturday, I was lucky enough to go to a book signing and meet two awesome authors – Maureen Johnson and Stephanie Perkins! It was so much fun! I’ve never really gone to a book signing before, since I always seem to be behind in the times and find out about things just a day or so too late. This time, thanks to my writing buddy Jeff, I was able to make it.

The book signing was held at Quail Ridge Books in Raleigh, NC, which is a really neat independent bookstore. I didn’t know this, but they have lots of events like this. Needless to say, I am now signed up to get their newsletter and I have started following them on Twitter! Raleigh isn’t too far away from where I live – only about an hour and a half drive – but since I didn’t feel like going alone, I talked my mom into coming with me. She agreed, despite not really knowing anything about these two authors, except that I really liked them. After listening to them, she now understands why I am so enamored with them both. 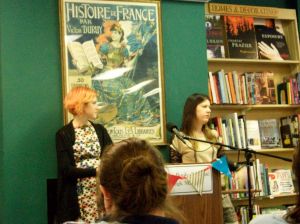 The event started off with a small panel discussion and a Q & A session. It was fun seeing so many younger people excited about reading. There were even a few very small fans (one in particular, who was still in a stroller) that Maureen and Stephanie had fun “talking” to. Actually, at one time, the little kid started laughing in a maniacal sort of way, and Maureen said that was just how she sounded while working on The Madness Underneath.

My favorite part of the panel was when they talked about writing and getting published, which are two very separate things. As a writer who wants to be published one day, it is always refreshing to hear how it sounds like from the other side – the side I hope to one day be on. It is easy to think, while plodding through your own manuscript, that published authors have it easy. Obviously, they’ve been successful, so they must be brimming with confidence and know exactly what they’re doing, right? Nope. Maureen confessed to the crowd that while writing, she often feels like sealing herself in a box and shipping herself off to Spain in order to get away from her manuscript. Stephanie has similar fantasies, except instead of Spain, she would find a small isolated cottage in England, throw her laptop off a cliff, and settle down with cups of tea while her husband plays the piano. Names would be changed, of course, so that no one would ever find her or her writing.

Maureen sees you with that camera!

After that was the signing, which was set up over in the children’s department. Everything moved pretty fast, but we never felt like we were being rushed. Maureen got very excited when a fan brought metallic gold Sharpie pens, and quickly appropriated one. They were both lovely, stopping to take pictures and sign as many books as you could carry in. I bought two books there, Maureen’s The Madness Underneath and Stephanie’s Lola and the Boy Next Door, and got both of them signed. And got a photo, of course. 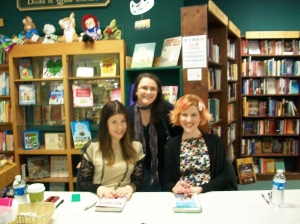 Maureen, Me, and Stephanie. Squee!

Ladies, it was so nice to meet you! Hope you come back soon!