This next book comes from the Book Club over at the Mallorean Tavern. We just finished reading Kushiel’s Dart by Jacqueline Carey and, I have to say, I’ve never read a book quite like it.

The main character is Phedre, a young woman who was born with a red mark on her left eye. This mark, called Kushiel’s Dart, is a sign from the god Kushiel that she is different – for the rest of her life, she will experience pleasure from pain. She is sold into indentured servitude until she can earn enough money to complete her marque, a large tattoo that covers her entire back. Phedre’s master, Anfiel Delauney, not only sees to her training as an adept, but also teaches her how to be observant and read 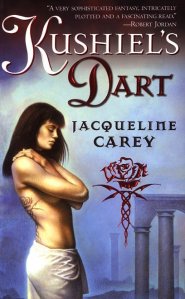 people, using her to spy on various members of other noble houses. In the process, Phedre is pulled into a scheme that could threaten the entire kingdom.

The book does several things very well. The world that this takes place, Terre D’Ange, is very vividly described. The people there are descended from the angels and it is beautifully written. The culture is incredibly rich and detailed.

There were a few things that bothered me. For one thing, I had a difficult time getting involved with the story until about a third to a half of the way through. The beginning has so much to set up that it tended to be a lot of information dumping. There were so many names of places and people thrown at the reader so quickly, it was hard to keep track of who was who and how they were all related. The book is also full of sexuality, both heterosexual and homosexual. While this is not a bad thing, there are some scenes that were very explicit. Some of them were a little hard to read, especially since Phedre’s experiences were very sadomasochistic and some were very violent. Luckily, they are also fairly easy to skim over without missing large portions of the plot, if this sort of thing is uncomfortable for people to read.

Bottom line: the book ends with a fairly good cliffhanger, one that has convinced me to buy the next book. I’m guessing the next one will be easier since I now know the specifics of the story world. I wouldn’t recommend it for everyone, since I know some of the subject matter might be a turn off, but I thought it was pretty good.