It’s really my husband’s fault that I decided to read Pygmalion. He is a big Audrey Hepburn fan, so one of his favorite movies is My Fair Lady. Around Christmas time, the movie was released on BluRay and, since we have recently purchased a BluRay player, it was a perfect present. 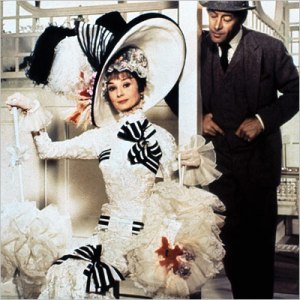 This famous movie musical was based on a play, but I was curious as to how faithful the movie was to its source. I was pleasantly surprised to see that it followed very closely. Several scenes were portrayed word for word – in fact, while reading it, I couldn’t help but hear Audrey Hepburn’s and Rex Harrison’s voices in my head! There were a few variations, naturally, but for the most part, it stayed fairly true.

The story is about Eliza Dolittle, a poor young lady who sells flowers on the street corners of London. There she meets Henry Higgins, a teacher of phonetics, the study of speech. He makes a boast that he could teach this bedraggled common girl how to speak properly and be able to fool anyone into thinking that she was royalty. Eliza takes him up on it. Her dream is to one day be a lady who owns her very own flower shop.

There are many other memorable characters. Colonel Pickering, another phonetics enthusiast who helps Higgins to teach Eliza. Eliza’s father Alfred, a drunkard who does whatever he can to get out of work. And Freddy Eynsford-Hill, a young man who falls madly in love with Eliza.

There are several places where the movie deviates from the play. For one thing, in the play, Eliza is able to learn how to speak “properly” much faster. The event where they go to show her off is much more understated. The movie also added in the famous scene at Ascot, where Eliza yells out, “Come on, Dover! Move your bloomin’ ass!” The most glaring difference is at the end of the play. The end of the movie, which I won’t spoil for anyone who hasn’t seen it, is a bit ambiguous. The play’s ending is similar, but then Shaw goes into an extended Epilogue, explaining where these characters end up.

I would recommend both the play and the movie. They are both definitely worth the time.