I absolutely love airports. There’s just something about the idea of being able to hop on a plane and go . . . anywhere! And you always see interesting people there, visiting from all over the world. I always thought it would be an interesting place to work, although probably stressful at times.

This weekend I went back up to New York. I got to see Seminar again, which was wonderful. I even did the stage door thing and got my Playbill signed by the entire cast. I’m such a sucker for this sort of thing. 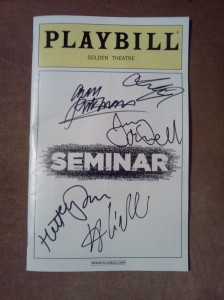 Heading back home today. I tried to get some writing done this weekend, but there wasn’t that much time. Plus, my packing space was limited, so most of my typing was done on my Kindle. Effective, but not very efficient. Although I’m getting faster. I did, however, manage to finish another book, Domes of Fire by David Eddings. It’s the first book in the Tamuli trilogy, which is a continuation of the Elenium trilogy, which I finished earlier in the year. A very good book. I’ll get around to re-reading the other two books at some point.

I still have about 20 minutes before my flight boards, so I guess I’ll kick back and relax for a bit.