So being a morning person worked out for . . . only two mornings. But I have an excuse, I mean, explanation. It’s been a rough couple of days here at the Calvin homestead. My seven year-old has strep throat. She’s better now, but she was miserable earlier in the week. So I haven’t gotten as much writing done as I planned. I did, however, finish another book.

I found it while perusing Entangled Publishing’s website (which can be found here if anyone is interested). My good friend, Minta Hall, has recently signed a book deal with them, so I thought I’d take a look at what they work with. They have a line of fantasy novels which, of course, drew my attention. I wanted to see what their fantasy books were like, just to see if my book might one day fit within their guidelines.

Of course, my book only has one solid chapter so far, but its never too early to be prepared, right? 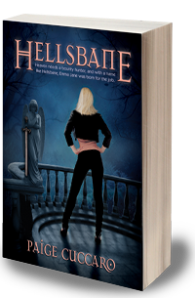 I chose Hellsbane by Paige Cuccaro because it sounded interesting. Angels, demons, swords – sounds like my kind of book! The story follows Emma Jane Hellsbane, a young woman who finds out that she is half angel. Her friend Tommy is also half angel, but has been marked as an illorum, destined to wield an angelic sword to send demons back to the abyss where they belong.

One problem. Its not just demons that they are dealing with. They also have to fight fallen angels, who are much more powerful. In addition to that, they are charged with finding the fallen angels who sired them in order to redeem themselves for their sire’s sins. Add in to the mix Eli, a beautiful angel tasked with training new illorum, and it spells trouble for our quirky heroine.

I enjoyed this book quite a bit. I like what Cuccaro did with her version of the classic battle between heaven and hell. It looks like this book is he first of a series, so I’ll be looking forward to seeing where else this story goes.