Home › nostalgic reads › NOSTALGIC READS: Too Much In Love

NOSTALGIC READS: Too Much In Love 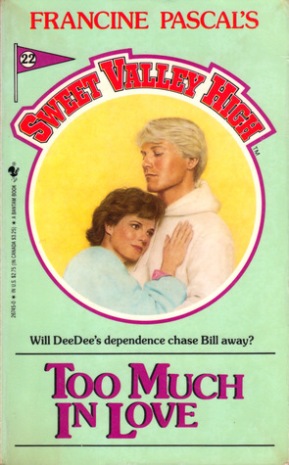 Title: Too Much In Love

Blurb: Bill Chase and DeeDee Gordon have been happy together for a long time. But lately DeeDee has become too dependent on Bill. She wants to do everything and go everywhere with him. Bill feels that he doesn’t have any room to breathe and decides it’s over between them.

Elizabeth doesn’t know why DeeDee is acting the way she is, but she knows DeeDee’s strange behavior is killing her relationship. Can Elizabeth help DeeDee regain her strength and independence before its too late?

This is one of the few books that doesn’t focus on the Wakefield twins but instead focuses on two side characters that we saw previously in Heartbreaker (which was book #8, so it’s been a little while). Bill is a surfer, swimmer, and has aspirations of being an actor as well. Jess had her sights on him, but lost him to DeeDee Gordon. Really, this book is DeeDee’s story of trying to regain her self-confidence, with the help of Elizabeth, of course.

I have mixed feelings about the Bill and DeeDee relationship, but hey, things worked out. I also can’t relate to having these intense feelings in high school. Yeah, I didn’t date all that much back then (or at all, really) so the idea of being so in love with someone when you’re that young just feels completely foreign to me. At the same time, I do understand what it feels like to lose your identity and confidence due to other circumstances.

DeeDee is an artist and is so good at design that she was invited to take special classes at the college. She is also dealing with her parents’ divorce and worries that her dad left because her mom went back to school and became an independent woman and that’s why her dad didn’t want to stick around. Which isn’t true, but for a sensitive teen girl looking in from the outside, I can see why DeeDee may have thought that. It makes her cling on to Bill like crazy, which in turn makes Bill very uncomfortable. He feels smothered and eventually tells DeeDee that they need to take a break.

Which, okay. I get that DeeDee was getting to be difficult to deal with, but come on Bill! She is crying a lot and seems to need you and you never ask her what’s going on? And supposedly you’re in love with this girl? I get that he’s just a teenage boy, but he is made out to be this sweet, caring guy and he sure doesn’t act like it. But Bill does have issues of his own – he had a girlfriend before he moved to Sweet Valley who died in a car accident. It took a lot for him to let DeeDee into his life, which is why I don’t understand why he was okay dropping her when she was clearly struggling.

To pull DeeDee out of her funk, Elizabeth gets DeeDee to help design sets for the school talent show and then feigns being sick so that DeeDee has to run the entire thing. It works. Despite DeeDee being afraid and having no confidence in her abilities to get the job done, she is able to organize everyone and get everything sorted. Elizabeth eventually comes clean and DeeDee immediately forgives her. I would have been so mad, but I guess the end justifies the means?

The subplot for this one involves the Wakefield parents going out of town and Jessica deciding to throw a big party. Her mistake was letting Lila Fowler anywhere near the guest list. Lila is dating a college boy and he brings a bunch of his drunken frat brothers over. They tear up the house, break a crystal vase (come on, girls, why did you leave that sitting out?), and spill beer on one of Mrs. Wakefield’s design plans for work. Once again, it’s DeeDee to the rescue, using her design skills that she learned in her college classes to copy out the plan and fix where the lines were smudged by the spill.

Oh, and Bill and DeeDee get back together again. Bill is happy once he sees that DeeDee is too busy for him, or something like that. It’s during the talent show thing and I guess makes him miss her, especially since she is now acting more like her old, confident self. Whatever. I don’t have high hopes of them making it long term.

The set up for the next book: Todd has been mopey all book and – hey, Liz doesn’t decide to leave him! You see, Bill! It can be done! Todd has a good reason to mope though: his father’s job is transferring him to Vermont. What will Liz and Todd do??