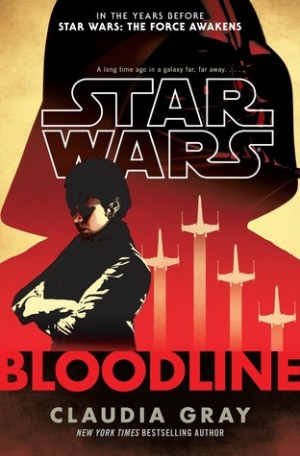 Blurb: Witness the birth of the Resistance

When the Rebellion defeated the Empire in the skies above Endor, Leia Organa believed it was the beginning to a lasting peace. But after decades of vicious infighting and partisan gridlock in the New Republic Senate, that hope seems like a distant memory.

Now a respected senator, Leia must grapple with the dangers that threaten to cripple the fledgling democracy—from both within and without. Underworld kingpins, treacherous politicians, and Imperial loyalists are sowing chaos in the galaxy. Desperate to take action, senators are calling for the election of a First Senator. It is their hope that this influential post will bring strong leadership to a divided galaxy.

As the daughter of Darth Vader, Leia faces with distrust the prospect of any one person holding such a powerful position—even when supporters suggest Leia herself for the job. But a new enemy may make this path Leia’s only option. For at the edges of the galaxy, a mysterious threat is growing…

This was a pleasant surprise! I haven’t read many of the Star Wars novels or novelizations. Not that I don’t like Star Wars – I do – but the books never really caught my attention (except for one time at an airport bookstore before ebook readers were really a thing and I needed something to read – I bought a copy of the novelization of The Phantom Menace and read it on the plane). I would never have read this if it hadn’t been for the Nerdist Book Club on YouTube, but I’m so glad I did because it was a really fun read.

I love that this book focused primarily on Leia. While of course she is a major character in the movies, the two male mains definitely get a lot more screen time. I absolutely loved seeing Leia in the spotlight. Not only is she a great character but let’s be honest – how many times do you see an older woman as the main character in a speculative fiction novel? Not many. Lots of teenage and early twenties protagonists, but not many in their fifties. And still a badass!

This was so much more a political novel that an adventure story, which I was really excited about. The closest we got to that was in the prequels where we saw the Imperial Senate fall apart, but we never really got to see it in action. Just because the Empire was toppled and the New Republic has taken over, it doesn’t mean that everything is sunshine and rainbows. The two main political factions have widely different beliefs and directions that they want the New Republic to go and they are absolutely terrible at trying to compromise or actually govern in any way.

Hmmm. As a citizen of the U.S. of A., that doesn’t sound familiar at all (insert eye roll here).

I really enjoyed how this book handled certain issues. For example, there is another senator, Ransolm Casterfo, who is in the opposite political party of Leia, and they have to work together. One of the things that sours Leia’s opinion of him initially is that he collects artifacts and remnants from the Empire, like Stormtrooper armor and such. As someone who fought in the war, Leia really hates seeing it, but Ransolm was a child during the war, he doesn’t have the same associations that she does. It leads to a lot of initial misunderstandings, but ultimately they have a really amazing friendship and partnership.

This book was just fun. So much fun. It explained perfectly how the New Republic became the First Order and how the Resistance came to be.