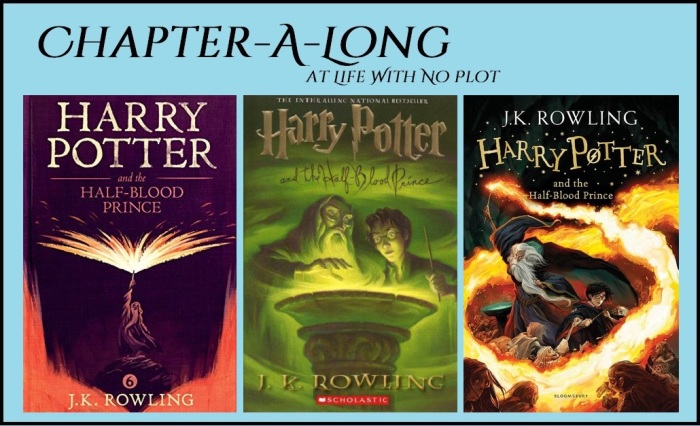 After a very eventful Christmas holiday, Harry, Ron and Ginny head back to Hogwarts. Mrs. Weasley is very emotional about saying good bye to them, and with the current environment, who can blame her. They travel through the Floo to McGonagall’s office and then head up to Gryffindor Tower. Outside the Fat Lady’s portrait they run into Hermione, who still isn’t talking to Ron, who has a note for Harry from Dumbledore, outlining the details of their next “lesson.”

Harry has plenty he wants to discuss with Hermione, but they are interrupted by Lavender, who is only there for “Won-Won,” much to Hermione’s disgust. Honestly, I sympathize with Hermione here. Ron started all this by being a jerk to her and Lavender is just being obnoxious at this point. She and Hermione have been roommates for six years now – you couldn’t tell she had a crush on Ron in all this time? And now you are crowing that you are the one who nabbed him? Cool it, girl.

Oh, and Harry wants to have Ginny join them, but Ginny runs off to meet up with Dean, which Harry doesn’t particularly like. Oddly enough, Ginny doesn’t seem too enthusiastic about it either. Hmmmm . . . But it’s time for Harry and Hermione to catch up a bit.

“So how was your Christmas?”

“I thought maybe, you know, over Christmas –“

“It was the Fat Lady who drank a vat of five-hundred-year-old wine, Harry, not me. So what was this important news you wanted to tell me?”

Harry is stuck between his two best friends and I’m sure it’s not a comfortable place to be. Instead of talking about their situation any further, he fills Hermione in on the conversation he overheard between Snape and Malfoy. Hermione agrees with the previously held opinions of others, in that Snape was only offering to help Malfoy in order to figure out what Malfoy was trying to do. But even if Snape was doing just that, it still proves that Malfoy is up to something, although Hermione is quick to point out that no one mentioned Voldemort by name, so they can’t be 100% sure that Malfoy is either working with Death Eaters or is a Death Eater himself.

Then Hermione asks how Lupin was and Harry mentions Fenrir Greyback. Hermione instantly remembers that they heard Greyback’s name when they were in Knockturn Alley. Malfoy threatened Borgin that he would send Greyback to check on his “progress.” It’s pretty hard evidence to get around, although Hermione still doesn’t want to believe it, saying that maybe it was just an empty threat. It’s a bit too much for Harry.

“You’re unbelievable, you are,” said Harry, shaking his head. “We’ll see who’s right . . . You’ll be eating your words, Hermione, just like the Ministry.”

The thing is, he’s not wrong. And he’s so frustrated that no one else can see it.

The next day they find out that they will get to take Apparition Lessons. Ron in particular is pretty excited about the prospect. He hopes he can pass on the first try, since both of the twins did and he doesn’t want them to tease him. Harry isn’t too excited about it since he got to Apparate along with Dumbledore and didn’t much enjoy it then. Still, their buddies were pretty impressed that Harry had already Apparated, even when he tells them how uncomfortable is it.

It’s lesson time with Dumbledore! The Pensieve is ready to go, although Harry can’t help but notice that Dumbledore’s blackened hand still looks terrible. Dumbledore first asks how Harry’s first meeting with the Minister went. Harry is quick to tell him that it didn’t go well. Turns out that one of the first things Scrimgeour did when he took office was contact Dumbledore and ask him to arrange a meeting between him and Harry.

“So that’s why you argued!” Harry blurted out. “It was in the Daily Prophet.”

“The Prophet is bound to report the truth occasionally,” said Dumbledore, “if only accidentally. Yes, that’s why we argued. Well, it appears that Rufus found a way to corner you at last.”

“He accused me of being ‘Dumbledore’s man through and through.'”

Dumbledore is, naturally, quite touched by Harry’s loyalty. He’s also amused by Scrimgeour’s attempts to try and find out what he’s up to. Scrimgeour had been sending Dawlish the Auror to try and follow Dumbledore, which did not turn out well for Dawlish. Dumbledore isn’t ready to tell Harry either. Harry quickly tells him about the Snape/Malfoy situation and Dumbledore, like everyone else, is not worried about it. Harry is frustrated but there’s not much he can do about it. Dumbledore still trusts Snape.

It’s on to the memories. There are two of them that they will be viewing for this session, more history about the boy who would become Voldemort, but first, some of Dumbledore’s personal recollections. Tom Riddle arrived at school, was sorted into Slytherin. He seemed like a quiet and talented student, likable, good-looking. His status as an orphan draws plenty of sympathy from all the teachers, especially since Riddle seems so eager to learn. A model student. Dumbledore wasn’t completely swayed. He remembered how Riddle behaved at the orphanage, how he had bullied and stole from the other charges there. Riddle knew this and never tried to win Dumbledore’s favor.

We also hear of the beginnings of the Death Eaters.

“As he moved up the school, he gathered about him a group of dedicated friends; I call them that, for want of a better term, although as I have already indicated, Riddle undoubtedly felt no affection for any of them. This group had a kind of dark glamour within the castle. They were a motley collection; a mixture of the weak seeking protection, the ambitious seeking some shared glory, and the thuggish gravitating toward a leader who could show them more refined forms of cruelty. In other words, they were the forerunners of the Death Eaters, and indeed some of them became the first Death Eaters after leaving Hogwarts.”

Dumbledore has been trying to piece together Riddle’s history at Hogwarts, although there are few who want to speak about him. From what Dumbledore has been able to piece together, Riddle was obsessed with trying to find out more about his family, specifically his father. Which makes sense, since he knew virtually nothing about them. He knows he was named after his father, which leads Riddle to search through Hogwarts records for Tom Riddle, Senior – he assumed that his father was the wizard, which was not true, but after not being able to find anything, he started researching his middle name, Marvolo, and finds out about the Gaunts.

At this point, it’s time to enter the Pensieve. The first memory is back in the Gaunts’ house, which looks worse than ever, the only person there is Morfin. Riddle enters the house and speaks to Morfin in Parseltongue. This takes Morfin aback, since he mistook Riddle for “that Muggle what my sister took a fancy to.” He flies off in a rage, towards Riddle, Senior, towards his sister.

“Ar, he left her, and serve her right, marrying filth!” said Morfin, spitting on the floor again. “Robbed us, mind, before she ran off! Where’s the locket, eh, where’s Slytherin’s locket?”

Voldemort did not answer. Morfin was working himself into a rage again; he brandished his knife and shouted, “Dishonored us, she did, that little slut! And who’re you, coming here and asking questions about all that? It’s over, innit . . . It’s over . . . .”

The memory ends abruptly. Whether Morfin blacked out due to being drunk or Voldemort attacked him, that’s all Morfin could remember. When he woke up, he saw that his ring had been stolen and that all the Riddles in the village had been killed. The Ministry knew that they were killed by magical means and immediately interrogated Morfin, who admitted to the murders. His wand was tested and proved to have cast the curse that killed them. He was taken to Azkaban and that’s where he died. Dumbledore guesses that Voldemort Stupified Morfin, took his wand, killed the Riddles, took Morfin’s wand back to him and modified his memory. Morfin fully believed he committed the murders, and it took a great deal of Legilimency from Dumbledore to get the memory of Voldemort out of his mind.

The next memory is even more important. It is at Hogwarts, in a younger Slughorn’s study, an apparent meeting of the Slug Club, including one Tom Riddle. They are talking about mundane subjects – a teacher who is retiring, Slughorn’s favorite candied pineapple. Harry notices that Riddle is wearing Morfin’s ring, meaning that this was after he had killed his father. This memory is odd though.

As several of the boys tittered, something very odd happened. The whole room was suddenly filled with a thick white fog, so that Harry could see nothing but the face of Dumbledore, who was standing beside him. Then Slughorn’s voice rang out through the mist, unnaturally loudly, “You’ll go wrong, boy, mark my words.”

The fog clears immediately and the conversation goes on. Slughorn dismisses the boys, but Riddle hangs behind in order to ask Slughorn a question: if he knows anything about something called Horcruxes.

And it happened all over again: The dense fog filled the room so that Harry could not see Slughorn or Voldemort at all; only Dumbledore, smiling serenely beside him. Then Slughorn’s voice boomed out again, just as it had done before.

“I don’t know anything about Horcruxes and I wouldn’t tell you if I did! Now get out of here at once and don’t let me catch you mentioning them again!”

The memory ends and they return to Dumbledore’s office. He tells Harry that this particular memory has been tampered with. Slughorn modified it, possibly because he was ashamed of what he did, but Dumbledore is confident that the real memory is still somewhere there. He gives Harry an assignment: get the real memory from Slughorn. Harry worries that he would need resources that he doesn’t have, like Veritaserum or the ability to use Legilimency, in order to accomplish this, but Dumbledore knows that trying to get the memory by force would never work. Slughorn is talented at Occlumency and probably carries the Veritaserum antidote ever since he gave Dumbledore the altered memory in the first place. Dumbledore also knows how highly Slughorn holds Harry in his regard, so if anyone can persuade Slughorn to spill the beans, it’s Harry. On that note, Harry is dismissed for the night.

See you next time for Chapter 18!