Home › Books I've Read › REVIEW: The Ocean at the End of the Lane

REVIEW: The Ocean at the End of the Lane 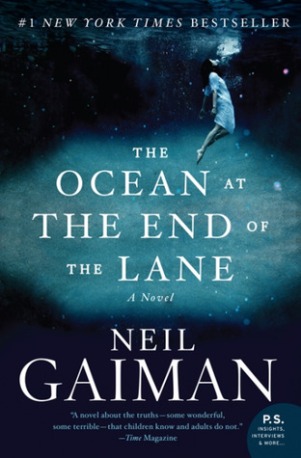 Title: The Ocean at the End of the Lane

Blurb: A middle-aged man returns to his childhood home to attend a funeral. Although the house he lived in is long gone, he is drawn to the farm at the end of the road, where, when he was seven, he encountered a most remarkable girl, Lettie Hempstock, and her mother and grandmother. He hasn’t thought of Lettie in decades, and yet as he sits by the pond (a pond that she’d claimed was an ocean) behind the ramshackle old farmhouse, the unremembered past comes flooding back. And it is a past too strange, too frightening, too dangerous to have happened to anyone, let alone a small boy.

A groundbreaking work as delicate as a butterfly’s wing and as menacing as a knife in the dark, The Ocean at the End of the Lane is told with a rare understanding of all that makes us human, and shows the power of stories to reveal and shelter us from the darkness inside and out.

Review: Finally catch up on some of my non-tour and non-ARC reviews – yay!

This book, y’all. Wow. I was completely blown away.

It’s such a small book. More of a novella, really. Unassuming. I knew it would be good because I have always enjoyed Neil Gaiman’s work, but I did not expect it to be as awesome as it was. There was a very old fashioned feeling to this story, like it was being told from another time. It almost reminded me of a fairy tale, although in a more modern setting. The tone felt very much like that, very otherworldly and scary. Gruesome in parts, as most original fairy tales are. At the same time, it is the story of the innocence of childhood and what it feels like to slowly loose that innocence.

We never learn the main character’s name, which makes it very easy to see things through his eyes as though they are happening to you. I loved his childhood friend, Lettie, who might be eleven years old, might be ageless. We don’t know. A lot of this book is about trying to figure out what is real and what is not real, or better yet, whether it matters whether something is real or not when you are experiencing it as a child. The monster of this book takes on many forms, all terrifying in their own way. It does make you wonder throughout whether there is any way to fight her and still survive. I also really loved Lettie’s mother and grandmother at the Hempstock farm. They were magical in all the right ways.

I read this very quickly, partly because it is so short, and partly because I absolutely could not put it down. If you are new to Neil Gaiman’s work, this is a very good one to start out with because some of his work gets very heavy with very deep themes. This one is much more simple while still being a rich story experience. Very similar to The Graveyard Book in that way, although no pictures. Pictures would have been nice.

GoodReads rating: 5 stars. Loved every minute of it.

Tags: book review, books, neil gaiman, the ocean at the end of the lane