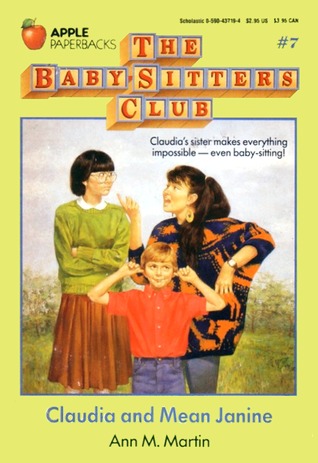 Blurb: Janine is mean! Claudia had been looking forward to running the summer play group with the rest of the Babysitters Club but everything changes when her grandmother, Mimi, is taken ill. Now instead of helping her friends, Claudia has to spend the summer Mimi-sitting. Things wouldnt be so bad if Claudia could only get some help from her sister, Janine.

Review: I remember feeling very conflicted when I read this one back when I was a kid. I was jealous because I had always wanted a sister, but I also saw how difficult Claudia and Janine had it. Still, after reading it again, it’s nice to see a sister relationship in a kids/MG book that reads very realistic. Claudia and Janine are total opposites. Claudia is artsy and creative, just not very good at school. Janine is a high school sophomore who is taking college classes for fun. Because they are so different, they have a very hard time communicating. Misunderstanding abound. In the end, they do learn to appreciate each other. It’s not a complete fix of everything, but it’s a start.

These two are sisters that will be good friends later in life as adults, but probably not until then.

The other part of the story really hit me hard: Mimi’s illness. She had a stroke. When I was a kid, from the time I was about five or so, I had at least one of my grandmas living with me and my parents (I actually had both of them there for a while). When I first read the books, I hadn’t really seen either of them too sick, but re-reading this as an adult brings back lots of memories. Both of my grandmas are gone now, but I did spend a lot of time with my maternal grandma when she was sick helping her do things that she couldn’t do on her own anymore. It was a difficult time, but special too.

The other story for this book is that the BSC decides to run a morning day camp thing three days a week during the month of July. Shenanigans ensue!