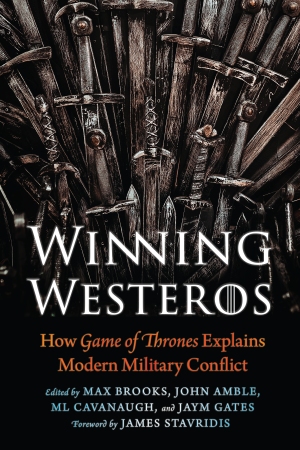 Blurb: Set in the fictitious world of Westeros, the hit television series Game of Thrones chronicles the bitter and violent struggle between the realm’s noble dynasties for control of the Seven Kingdoms. But this beloved fantasy drama has just as much to say about the successful strategies and real-life warfare waged in our own time and place. Winning Westeros brings together more than thirty of today’s top military and strategic experts, including generals and admirals, policy advisors, counterinsurgency tacticians, science fiction and fantasy writers, and ground‑level military officers to explain the strategy and art of war by way of the Game of Thrones saga.

Each chapter of Winning Westeros provides a relatable, outside‑the‑box way to simplify and clarify the complexities of modern military conflict. A chapter on the doomed butcher’s boy whom Arya Stark befriends by World War Z author Max Brooks poignantly reminds us of the cruel fate that civilians face during times of war. Another chapter on Jaqen H’ghar and the faceless men of Bravos explores the pivotal roles that stealth and intelligence play in battle. Whether considering the diplomatic prowess of Tyrion Lannister, the defiant leadership style of Daenerys Targaryen, the Battle of the Bastards and the importance of reserves, Brienne of Tarth and the increased role of women in combat, or dragons as weapons of mass destruction, Winning Westeros gives fans of Game of Thrones and aspiring military minds alike an inspiring and entertaining means of understanding the many facets of modern warfare. It is a book as captivating and enthralling as Game of Thrones itself.

Review: This book is something that I would not normally have picked up to read. I am a fan of Game of Thrones, but definitely the books more than the television show. I only watched part of season 1 and couldn’t really take the blood and gore. But I saw this on NetGalley right around the time everyone was talking about the show’s finale, so I figured I’d give it a go. It would at least be interesting.

It was very interesting! I learned a lot! This is a collection of essays that uses both real world examples and other fictional examples to really go into detail of what makes the Game of Thrones world seems so real. I am not as knowledgeable about history as I should be, so seeing something that I am familiar with compared to World War I, World War II, the Gulf War, and other real-life military engagements was fascinating. I particularly thought it was interesting (and funny) how they compared Daenerys’s dragons to the emergence of airplanes in modern military history. Hey, it’s the reason why there aren’t a lot of walled cities anywhere anymore – they don’t stop airplanes! They don’t stop dragons all that much either.

Like any collection of essays, some were hit and miss. I definitely enjoyed some more than others – some were very, very dry, but others incredibly interesting. Some of my favorites were “The Source of Tyrion Lanister’s Unlikely Survival and Success” by Joe Byerly, “Game of Pwns: Baelish and Varys as Drivers of Modern Conflict” by Nina A. Kollars, and “From Brienne of Tarth to Lyanna Mormont: Shifting Attitudes about Women in Combat” by Kelsey Cipolla.

If you are a history buff, this would definitely be up your alley. Lots of interesting facts and details that I know I never thought about before. If you are a Game of Thrones fan, maybe give this as go as well, just to see how these stories are not as fantastical or far-fetched as you might think.