Harry Potter and the Order of the Phoenix – Chapter 32 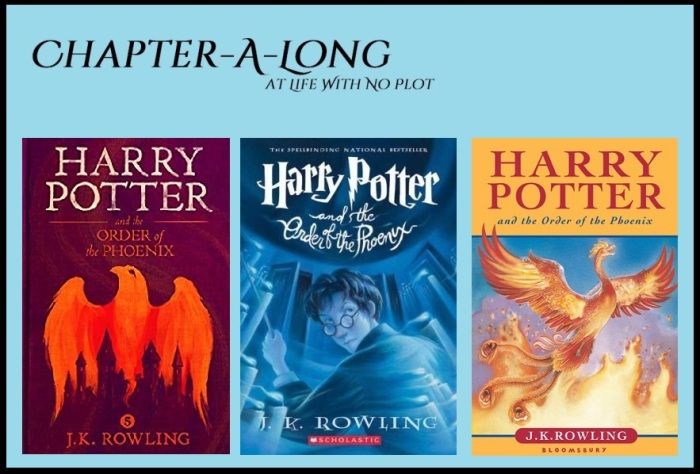 In Chapter 32, Harry has to try and figure out what to do about his vision of Sirius, and as usual, everything goes wrong. Let’s go!

Everything is a mess now. Professor Tofty is trying to get Harry to the hospital wing, but Harry just wants to run to Sirius’s aid. He tries to say that he was just having a nightmare, which does work. Tofty thinks it’s because of all the pressure Harry has been under due to the exams. This time, instead of just running off on his own, he goes to the one person in the school who he knows is a member of the Order – McGonagall.

But McGonagall isn’t there. Remember, she took several Stunning Spells right in the chest the night before. She was transferred to St. Mungo’s. Dumbledore is long gone. Harry feels quite alone right now. After the exam is over, he runs to find Ron and Hermione and tells them what he saw. They react with varying shades of disbelief.

“Harry,” said Hermione in a rather frightened voice, “er . . . how . . . how did Voldemort get into the Ministry of Magic without anybody realizing he was there?”

“How do I know?” bellowed Harry. “The question is how we’re going to get there!”

“But . . . Harry, think about this,” said Hermione, taking a step toward him, “it’s five o’clock in the afternoon . . . The Ministry of Magic must be full of workers . . . How would Voldemort and Sirius have got in without being seen? Harry . . . they’re probably the two most wanted wizards in the world . . . You think they could get into a building full of Aurors undetected?”

As usual, Hermione makes good points, but Harry is beyond using logic. This is Sirius we’re talking about – his only real family at this point. When Hermione tries to point out that it may have just been a dream, Harry says no, it’s not, remember Mr. Weasley. That seemed like “just a dream,” and turned out to be spot on. And it saved Mr. Weasley’s life. This brings Ron around. He says that Sirius may have left Grimmauld Place to get some fresh air since he had been so desperate to leave. Maybe Voldemort caught him and then magicked him into the Ministry somehow. Sirius is known to be a pretty powerful wizard, after all. Plus his brother had been a Death Eater, so maybe Sirius knows more about this mysterious weapon than he’s been telling them.

Hermione is still very skeptical, even though Ron is now on Harry’s side. She also says that maybe, just maybe, Harry has a “saving-people-thing.” Like when he tried to save Gabrielle in the Second Task of the Triwizard Tournament. It was very noble of him, but it wasn’t necessary. It wasn’t his responsibility. He just did it. Maybe Voldemort is playing this up, making sure that Harry would come to him by taking Sirius. Harry points out again that it wouldn’t matter if that’s why Voldemort did it, Harry still has to save Sirius, even if he gets accused of “acting the hero.” Hermione tries to say that maybe it really was just a dream this time, and Harry can’t take it anymore.

“You don’t get it!” Harry shouted at her. “I’m not having nightmares, I’m not just dreaming! What d’you think all the Occlumency was for, why d’you think Dumbledore wanted me prevented from seeing these things? Because they’re REAL, Hermione — Sirius is trapped — I’ve seen him — Voldemort’s got him, and no one else knows, and that means we’re the only ones who can save him, and if you don’t want to do it, fine, but I’m going, understand? And if I remember rightly, you didn’t have a problem with my saving-people-thing when it was you I was saving from the dementors, or” — he rounded on Ron — “when it was your sister I was saving from the basilisk –“

Hey, don’t start on Ron here, Harry. He’s on your side already!

They are getting louder and their voices carry. The door of the classroom opens and Ginny walks in, followed by Luna. At first Harry brushes them off, but Ginny offers to help. The main thing that Hermione wants to do is to make sure that Sirius really has left headquarters before they run to his rescue. That way if this really was just a nightmare, or if this is some trick, they will know the truth. In order to check, they need to get to Umbridge’s fire in her office again, and this is where Ginny and Luna can come in. They can be lookouts. All they need is a distraction, which will be provided by Ron, who will tell her Peeves is destroying something.

They won’t have much time, and they’ll need to avoid Umbridge, Filch, and the Inquisitorial Squad. But it’s all they can do. Harry runs to get the Invisibility Cloak and they get set up. Harry’s scar is still hurting, but not so bad that he thinks Sirius has been killed yet. That’s something anyway.

Ginny and Luna use the story that the corridor is full of Garroting Gas, which clears it out, and soon the coast is clear. Ron leaves to distract Umbridge and Harry and Hermione enter her office. Harry uses the floo to call Grimmauld Place, but it’s empty. No one is there. He calls out, but only Kreacher answers. Harry asks Kreacher where Sirius is.

“Nobody here but Kreacher!” said the elf gleefully, and turning away from Harry he began to walk slowly toward the door at the end of the kitchen. “Kreacher thinks he will have a little chat with his Mistress now, yes, he hasn’t had a chance in a long time, Kreacher’s Master has been keeping him away from her.”

“Where has Sirius gone?” Harry yelled after the elf. “Kreacher, has he gone to the Department of Mysteries?”

Kreacher stopped in his tracks. Harry could just make out the back of his bald head through the forest of chair legs before him . . . .

“Master will not come back from the Department of Mysteries!” he said gleefully. “Kreacher and his Mistress are alone again!”

Before Harry can do much else, he is dragged away from the fire by Umbridge. She had put Stealth Sensoring Spells around her office after the second niffler, so she knew immediately when someone broke in. Harry’s wand is taken away, as is Hermione’s. Harry tries to lie and say he broke in to get his Firebolt. Soon they are joined by Ron, Ginny and Luna, and also Neville, who tried to stop the Inquisitorial Squad from taking Ginny.

Umbridge demands that Harry tell her who he was talking to, but Harry won’t answer. She sends Draco to get Professor Snape, and this is where Harry realizes his mistake. There was one other Order member in the castle, even if it was one who currently doesn’t like him all that much. Still, I wonder how much Snape would have helped him, especially given that it was Sirius who was in danger. I’d like to think he would have, but I honestly don’t know. I tend to give Snape way more credit than he probably deserves.

When Snape arrives, Umbridge asks him for more Veritaserum. Snape says she took the last bottle he had when she questioned Harry last time, but she should still have some because it only takes three drops. Apparently Umbridge tried to give Harry the whole bottle. I wonder if it’s possible to have Veritaserum poisoning, because that seems like a lot to overdose on! Umbridge asks if he can make any more, to which Snape says that yes, of course he can, but it takes a full month to brew. That doesn’t make Umbridge happy at all. She tries to explain why she needs it, that Harry was trying to communicate with someone, but there isn’t much that can be done. If she had known better, she should know that you can’t just magic up a potion if it takes that long to brew. She’s really not all that smart, is she? Just power hungry.

Snape stares at Harry and, for once, Harry wants Snape to read his thoughts. He tries to concentrate on what he had seen, but knows it isn’t working. Umbridge is furious with Snape’s attitude and puts him on probation for being “deliberately unhelpful.” As Snape turns to leave, Harry knows he has one last chance to try and get someone to help him.

Umbridge doesn’t know what any of this means and demands that Snape tell her, but Snape claims that he doesn’t know either and that Harry is just babbling. At that point, Umbridge is desperate. She needs to do something, and what she finally decides on is that the Cruciatus Curse should force Harry to tell the truth. Yeah, because torture always works. Hermione shrieks that it’s illegal, but Umbridge is beyond reasoning. As far as she’s concerned, the end justifies the means, and if that means she has to work outside of the Ministry’s knowledge, that’s just what she’ll do. After all, that’s what happened when she sent dementors after him last summer. Yes, after all of that, Umbridge admits that she sent dementors into a Muggle neighborhood to silence Harry from speaking the truth.

As she’s getting ready to cast the spell, Hermione cracks. She shouts that they have to tell Umbridge everything and starts crying. She starts telling a story, a very convincing one at that, and Harry and the others try to keep their faces blank. According to Hermione’s tale, they were trying to contact Dumbledore in the fire, but couldn’t find him. They were supposed to tell Dumbledore that some sort of weapon they were working on for him was ready now. They don’t understand what the weapon is or does — they were just following Dumbledore’s instructions.

It works. Umbridge immediately insists that they take her to the weapon. I have to say, Hermione is a good actress here. She is really laying it on thick and it is working so much.

“Fine,” said Hermione, now sobbing into her hands again, “fine . . . let them see it, I hope they use it on you! In fact, I wish you’d invite loads and loads of people to come and see! Th-that would serve you right — oh, I’d love it if the wh-whole school knew where it was, and how to u-use it, and then if you annoy any of them they’ll be able to s-sort you out!”

I’m sure that Hermione is probably crying real tears at this point, probably scared out of her wits, but that doesn’t mean she’s still not the smartest witch of her age. These words convince Umbridge that wherever they are going to go to this weapon, she will be taking them alone. No other teachers. No Inquisitorial Squad. Just Umbridge, Harry and Hermione, heading out to . . . . wherever Hermione is going to lead them.

See you next time for Chapter 33!