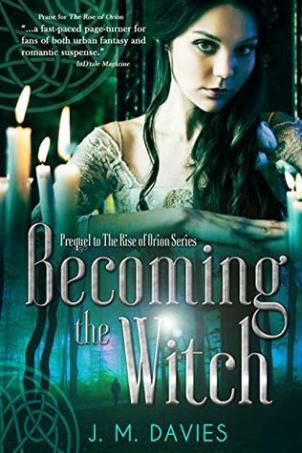 Blurb: As Miss Elizabeth Marshfield, I’ve never had a choice. My marriage to Sir Charles Dempsey is arranged. Love plays no role in this, but my sizable dowry does. On my eighteenth birthday, as I promise to honor and obey, eerie voices unlock a curse and an ancient magic I didn’t know I possessed, and they won’t rest until I answer them.
My husband suspects I’m mad—and mad, I may well be. But this cold-hearted brute cares naught for me as his mistress warms his bed.

I don’t know who I am anymore. Even the blacksmith, Barnaby, can’t disguise his contempt, despite saving me from a fall from my horse. So why does this insolent man affect me so? He reveals he’s a Roma called Raven, and the birthmark of the moon I have branded on my wrist proves I’m entwined in his destiny. Even talking with him could mean the hangman. But my heart has spoken, and I know nothing will ever be the same.

For once—I will choose my fate, even if it leads to a noose around my neck.

Review: So this was really interesting. I’ve never read a prequel for a series that I hadn’t read before, or even heard of, really. I will say that this book definitely makes me want to look into the Rise of Orion series because this prequel was really good! Thank you to Xpresso Book Tours for the review copy!

It was also really short, which since I’ve been reading a lot of behemoths lately, was nice.

I really enjoyed the writing in this. It was crisp, clean, and had lots of details that made the world really come alive on the page. It made the scenery really stand out, both the heaviness of the Dempsey estate and the wildness of the Roma camp, and it also made the abuse that Elizabeth goes through feel very visceral and real. Those scenes were difficult to read, but they are supposed to be. This is not a happy story, but these events set into motion future events later in the series. One thing that Elizabeth deals with is hearing the voices of her past lives, so I can only guess that she will be coming back in a future life at some point? I hope so.

Speaking of Elizabeth, let’s get into the characters. Elizabeth is a really well-written character, a spunky, independent young girl who is forced into a marriage with a very controlling man. Watching her change over the course of the story, trying to escape, and ultimately succumbing to her fate was a very well-written story arc. Sir Charles is a terrible villain who, on top of being an abusive and horrible husband (even flaunting his mistress right in his wife’s face), is also part of some sort of secret society that we only get hints at here. It definitely made me want to learn more.

There are lots of other supernatural elements — the magic of the Roma people, vampires, werewolves, witches — that are only touched on here, but I can only assume we get more details into these different groups as we go into the series itself. There was a bonus chapter included , the first chapter of book #1, so I know that the prequel is set in a different time period — it’s in the 1800s, whereas the series itself looks to be a modern, urban fantasy. Still, I really enjoyed this author’s writing style, so I would really like to continue reading this to see where it goes.