Harry Potter and the Goblet of Fire – Chapter 19 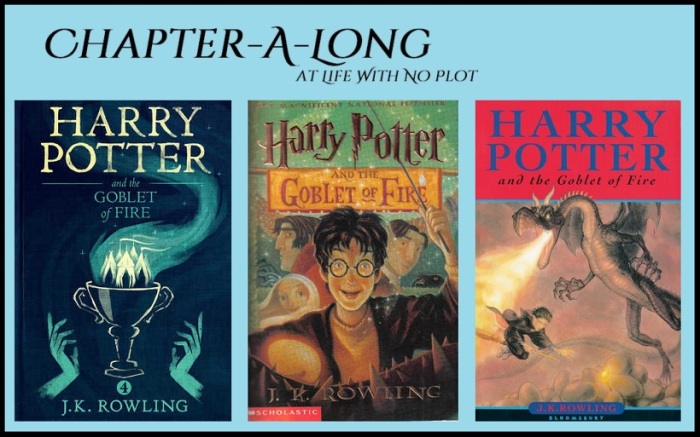 In Chapter 19, things for Harry get worse as he gears up for the first task of the Triwizard Tournament. Let’s go!

Poor Harry. Things just aren’t getting better for him, although he is looking forward to talking to Sirius, however that’s going to happen. One thing that has made things worse for him is the Daily Prophet article. Rita Skeeter is a really terrible reporter and has decided to make the whole piece pretty much about Harry, giving very little attention to the two international champions and not mentioning Cedric at all. Seriously, Skeeter? What the heck! She also wrote drivel like this:

I suppose I get my strength from my parents. I know they’d be very proud of me if they could see me now . . . Yes, sometimes at night I still cry about them, I’m not ashamed to admit it . . . I know nothing will hurt me during the tournament, because they’re watching over me . . .

Ugh. Not only did Harry not say anything like that at all, but it’s just so over sentimental and melodramatic. One more time, UGH! As you can imagine, the other students who were already not to happy about this whole situation are giving Harry all kinds of crap about this. Except for one: Cho Chang. She actually acts quite nice and wishes Harry luck. This just makes Harry’s crush on her get even stronger and it’s really sweet.

Hermione has been getting a bit of flack since the article said she was Harry’s girlfriend, but she’s even more irritated because her two best friends won’t talk to each other. Neither one will admit that they are wrong, and she’s stuck in the middle.

The first Hogsmeade trip arrives and Harry won’t go unless he can wear the Invisibility Cloak to avoid people staring at him. While Hermione is still irritated because now it looks like she’s talking to herself and sitting alone at the Three Broomsticks, Harry imagines what it would have been like if he hadn’t been chosen, if he was looking forward to cheering Cedric on as a normal spectator like the rest of the students. But then, Harry has never been normal, has he. He also wonders if the other champions are as nervous as he is. They still know nothing about what the task actually is yet.

They also find out that Moody’s magical eye can see through the Invisibility Cloak. So that’s interesting. Also, Hagrid, who’s with Moody at the time, asks Harry to come see him at midnight that night. Harry is also meeting Sirius (somehow) in the Gryffindor common room at 1 AM, so it’s going to be a tight squeeze, but Harry also knows that Hagrid wouldn’t ask him to break the rules and leave the castle so late without a good reason.

When he goes to Hagrid’s hut that night, Hagrid leads him to the Beauxbatons carriage where Madame Maxime has been staying. It seems like they are . . . going on a date? And Hagrid asked Harry to come watch? That’s not weird or creepy or anything.

They walk a long ways, Harry worried about missing his time to see Sirius, when they come around some trees and see a bunch of dragons. Yep, dragons. Four dragons, to be exact. They look wild and terrible and really, really angry. One of the keepers there is none other than Charlie Weasley, who questions Hagrid on his decision to bring one of the rival Headmasters out to see them, since this is supposed to be a secret. I’m on Charlie’s side on this one. What was Hagrid thinking?

The dragons are all nesting mothers and the champions are going to have to get past them somehow for some reason.

Five of Charlie’s fellow keepers staggered up to the Horntail at the moment, carrying a clutch of huge granite-gray eggs between them in a blanket. They placed them carefully at the Horntail’s side. Hagrid let out a moan of longing.

Aw, Hagrid never really got over losing Norbert, did he?

Charlie also asks how Harry is doing and worries how he will be doing after facing a bunch of dragons. It’s a fair question. Each one of these things is being semi-controlled by seven or eight fully trained dragon wranglers. What is a 14 year old kid going to be able to do? Apparently Molly Weasley is also really, really worried. Harry, on the other hand, has decided that he’s seen enough and sneaks back to the castle, only to run right into Karkaroff. He still has his Invisibility Cloak on so Karkaroff doesn’t see him, but it’s funny that both of the rival Headmasters were keen on sniffing out the secrets of the tournament for their champions. I just can’t see Dumbledore ever doing that, you know?

Harry gets back to the common room just in time to meet Sirius, who appears in the fireplace. He tries to pretend like he’s fine, but everything just sort of spills out. How no one believes him. How the article made everything worse. How Ron has ditched him. And now he has to fight dragons. Sirius listens and is very sympathetic, but wants to warn Harry about something.

“Karkaroff,” said Sirius. “Harry, he was a Death Eater. You know what Death Eaters are, don’t you? . . . He was caught, he was in Azkaban with me, but he got released. I’d bet everything that’s why Dumbledore wanted an Auror at Hogwarts this year — to keep an eye on him. Moody caught Karkaroff. Put him into Azkaban in the first place.”

So . . . that’s a whole lot of information to unload on a kid who’s already feeling overwhelmed. It does make sense though. If Karkaroff was a Voldemort supporter and Dumbledore knew he was coming back to Hogwarts for the tournament, who better to keep an eye on things that Mad-Eye Moody, the one who caught Karkaroff in the first place. It certainly explains Karkaroff’s reaction to Moody when he saw them. But does that mean that Karkaroff put Harry’s name in the Goblet of Fire? Harry doesn’t think so because Karkaroff seemed pretty angry about the situation, but Sirius reminds him that he must be a pretty good actor to have gotten set free from the Ministry in the first place.

Sirius has been staying below the radar, but that doesn’t mean that he hasn’t been paying attention. Death Eaters are becoming more active. They still haven’t found that missing witch, Bertha Jorkins. Even though Voldemort is supposedly powerless and wandering through the Albanian countryside, it feels like something is in the works, something is being planned. We just don’t know what.

Back to our immediate concerns: dragons. Sirius starts to try and tell Harry a simple spell that could help him, but Harry hears someone coming downstairs and tells Sirius to leave. Turns out that someone was Ron, who even though he is mad at Harry, was still worried when he woke up in the middle of the night and saw that Harry was missing. Harry, really upset that his talk with Sirius was interrupted right before Sirius could help him, completely goes off on Ron and yells at him, even throwing one of the badges at him before running back up to the dorm.

Ugh. These boys really need to get it together! Hug it out, man!

See you next time for Chapter 20!