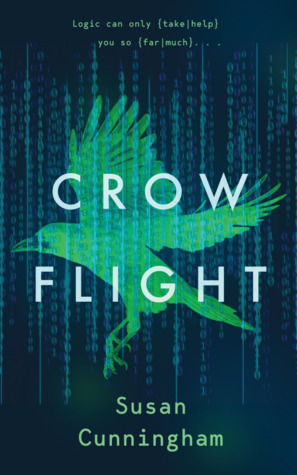 Blurb: Gin trusts logic a little too much. She even designs programs to decide what to eat and how to spend her time. All that changes when she’s paired with a new transfer student, Felix, on a computer modeling assignment to explain certain anomalies in the behavior of crows.

As she enters Felix’s world and digs further into the data behind crow behavior, Gin uncovers a terrible secret. And the wrong decision could equal disaster squared . . .

Review: Another review for NetGalley, and it was a very pleasant surprise! I enjoyed this book a lot more than I thought I would. Not that I had a bad expection, but I had no expectations at all.

Let’s start with our main character, Gin. I absolutely loved her. More stories about nerd girls, please! I could relate to her on a level that I did not expect. She loves computers and making these models and apps to help her with her life. She is awkward and has trouble making friends at school, but she is also very confident and knows who she is. She doesn’t expect to find her self-worth through other people. Her goal is to get a very prestigious internship and then go to Harvard.

She doesn’t quite know what to do with Felix, and for most of the story, I didn’t either. He was a big part of the mystery, even though he seems like mostly a normal, nice guy. A big part of this story was trying to figure out what was going on with him and, of course, with his family’s pet crows. In the beginning, their behavior seems almost magical (to the point that I almost thought this had fantastical elements at one point, but it doesn’t – they weren’t actually “talking” to the crows, they are just very well trained).

The story itself did drag in some places, but it also really kept me invested. I didn’t want to put it down. I was a bit disappointed in the ending, as I was expecting more of a final confrontation, but if there was one, it happened offstage somewhere. It was a satisfying ending, I just wish we had seen it more on the page, especially since so much time was spent leading up to it.

Overall, I would definitely recommend this book. It was interesting and fun to read with some really good characters.