So since I have all the free time in the world, and no books at all on my TBR pile, ur, mountain, I’ve decided to embark on a new project. Most likely, as with my other projects, this one will last a little over a month and then disappear, but I hope not. Some of you might remember that I had started another blog called “Chapter’d” where I thought I would try tackling the review-a-book-chapter-by-chapter thing that I had loved following on other blogs, like Mark Reads and Reading With Avengeance.

All well and good, except that keeping up a schedule like that is hard! I was honestly surprised by just how difficult it was.

I have decided, however, to give it a go again. I’ve recently started following the blogs of a few of the folks over at Tor.com, one of which is Emily Asher-Perrin. She is awesome. I have posted a few links to her blogs before. She has also recently started doing a Harry Potter re-read over at Tor and has inspired me to attempt to do the same. Posts will be once a week, probably on Thursday or Friday, and will feature one or two chapters, depending on length.

Why am I doing this? Who knows. I can certainly think of worse ways to spend my time.

So, without further ado, here’s chapter one. 🙂 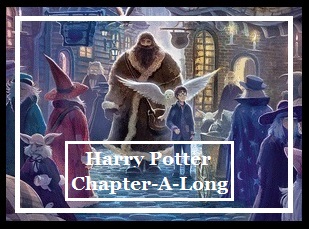 First of all, be very aware that spoilers will abound with these posts. If you haven’t read any of the Harry Potter books, well . . . what are you waiting for!

Mr. and Mrs. Dursley of number four, Privet Drive, were proud to say that they were perfectly normal, thank you very much.

It’s funny, but this first sentence of the entire Harry Potter saga tells you everything you need to know about the Dursleys. It was funny, but when I read this again this time, it reminded me of a similar statement from another fantasy series.

The Bagginses had lived in the neighbourhood of The Hill for time out of mind, and people considered them very respectable, not only because most of them were rich, but also because they never had any adventures or did anything unexpected.

Believe me, I am NOT comparing Bilbo Baggins to Vernon Dursley, not by a long shot. What I don’t understand is this pride in being “normal,” that being predictable and keeping your head down is the main way to be a respected member of society.

I mean really, how boring is that!

In the Dursley’s case, it also means shunning those who don’t fit into their brand of normal, which includes Mrs. Dursley’s sister. The thing is though, I can’t imagine that anyone particularly likes the Dursleys all that much, even in the normal world. Vernon is loud and overbearing and yells at his coworkers. Petunia spends most of her time gossiping and spying on her neighbors to see what sordid things they are up to. Who would want to hang out with these people?

And then there’s Dudley. Don’t even get me started on Diddy Dinkums.

When their happy little hum drum life starts to get turned upside down, I can’t help but be happy about it. Vernon is being stalked by a tabby cat (who we all know by now is Professor McGonagall), he sees people wearing brightly colored cloaks walking all over the place (and even gets hugged by one of them). There are shooting stars and owls flying everywhere. You know something strange is going on, but you don’t know exactly what.

And then, over on her blog post at Tor, Emily makes a valid point that shuts down all the fun:

Everything was upbeat and dandy and silly the first time around, and I recall being so curious about this family and the You-Know-Who business and what the cloaked people were fussing over and what a Muggle could possibly be. Then I was rereading it and suddenly it was all, OH RIGHT, JAMES AND LILY POTTER ARE DEAD, IT HAPPENED LAST NIGHT AND THEY WERE ONLY 20 YEARS OLD, AND SIRIUS GAVE HIS BIKE TO HAGRID AND IS CURRENTLY BEING CARTED OFF TO AZKABAN PRISON, NOTHING WILL EVER BE OKAY AGAIN.

The Wizarding World has much to celebrate. Lord Voldemort is gone, at least for now, impossibly vanquished by a tiny baby boy. But also, the most tragic thing in the entire book has just happened – Harry Potter’s life has been changed forever, his parents ripped away from him before he ever has the chance to know them – and the first time reading this, WE HAD NO IDEA HOW AWFUL THIS IS.

It’s also interesting how the movies have changed how I picture certain characters in the books. Take James and Lily, for example. We learn in Deathly Hallows that they were both 20 or 21 when they died, but I never picture them as being that young because the actors in the movies don’t look that young. They were only a few years out of school. It’s also interesting to think that other characters we meet later, Snape for example, are the same age as James and Lily would have been, which would make Snape in his 30’s throughout Harry’s time at Hogwarts. Since Alan Rickman, who plays him so brilliantly in the movies, is a bit older than that, I always picture Snape as being much older than he should be.

Whoa, getting way ahead of myself. Jeez.

So we meet Albus Dumbledore, who you can tell right away is more awesome than the Dursleys will ever be. A powerful wizard, the only person Voldemort ever feared, lemon drop connoisseur . . . but I do have to question his judgment about leaving Harry with the Dursleys in the first place. I understand that he wants Harry to grow up away from all the fame and pressure of being the one who defeated the Dark Lord. “Famous before he can walk and talk! Famous for something he won’t even remember!” Dumbledore explains. But really, the Dursleys? I know they are Harry’s only relatives, but still, couldn’t they find anyone else? The giant squid in the lake at Hogwarts has more kindness and compassion than these people! But Dumbledore is there and I’m not, so my opinion clearly doesn’t matter.

Harry is brought to the Dursley’s by Hagrid, who borrowed Sirius Black’s motorcycle to bring him there. The motorcycle that Sirius won’t need anymore because he will be spending the next thirteen years in Azkaban. Oh my heart. Again, tragedy at every turn! Why did I enjoy this book so much? Oh yeah, because when you first read it, you don’t realize who these people are and the future that is in store for them. Sigh. It’s from Hagrid that we realize that not everyone is celebrating. The lovable giant is in tears thinking of the Potters’ fate, and of poor Harry being abandoned. I love Hagrid so much.

The only thing we do know is that something will be happening in Harry’s future. Left on the doorstep of his “normal” relatives, when he is anything but. Nothing can go wrong with this plan, can it? Well, not wrong exactly, but it’s not going to be an easy life. We’ll find out just how difficult it has been, but not until the next chapter. 🙂

Be sure to check out Emily’s post about Chapter 1. She’s much better at this than I am.