I can’t tell you how much I am enjoying this series. Oh wait. Yes I can. That’s what these reviews are for!

Sorry. Stupid joke. Had to get it out of my system.

So here’s my first review for 2014, which is actually the last book I read for 2013. This is book two in the series, so there are spoilers there for book one (you can see my review of book one, White Cat, here). Here is my review of Red Glove by Holly Black, book two in the Curse Workers series. 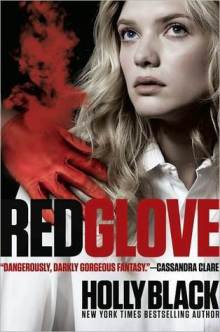 I’m really digging this combination of urban fantasy and mobster story. We left Cassel at the end of the last book reeling because he found out that he’s not just a worker (since he always believed he wasn’t) but a transformation worker, one of the rarest and most powerful of their kind. After realizing that his brothers have been using him and altering his memories, Cassel just wants to go back to somewhat of a normal life. But of course, he can’t. Why? His mother is out of jail and insists that he help her run cons in Atlantic City.

Let me tell you, his mother (an emotion worker) has some serious crazy issues. She’s manipulative as all get out. For example, in order to make Cassel feel better/forget what his brothers did to him, she works Lila, the girl Cassel has been in love with since he was a kid, into believing that she is in love with Cassel. It’s a relief when Cassel is able to get back to school, but that’s when it happens. His older brother Philip is killed.

Who did it? No one is sure, but they think it’s a woman, given the security footage. A woman wearing a dark coat and a red glove. Cassel is given two very different offers. Offer #1 comes from the feds – join our team and help us find out who killed your brother. Offer #2 comes from Zacharov, head of the largest crime family of workers (and Lila’s father) – come work for us and take your brother’s place.

I’ve never read a book like this, where pretty much everything is uncertain, every relationship, every task to accomplish. Cassel never knows if he’s going to go to jail or get shot in the head. In the meantime, he’s still trying to go to school and have the opportunity to escape this life, or at least try to. He’s a fun character to read because he does have a criminal mind, yet he also has a strong conscience.

I can’t wait to read book three and, thanks to Amazon, it should arrive sometime today.