Book Review: The Girl in the Steel Corset by Kady Cross 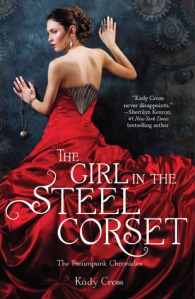 For some reason, I’ve started reading a fair amount of steampunk lately. Not sure why exactly. It was never anything I was interested in before, but I’m really enjoying it now. And what’s not to like? Victorian clothing styles. Corsets. Crazy steam powered technology that pretty much kicks the butt of stuff we have today.

I read this book for two reasons. One, the podcast will be reviewing it this weekend. And two, look at that cover! It’s gorgeous!

The story is about Finley Jayne, a young girl working for a nobleman named Lord Felix. He’s known for basically assaulting his female staff, but when he makes advances on Finley, he’s in for a surprise. Basically, this girl is crazy, abnormally strong, as if another person has taken over her body. It scares her, this dark alternate personality, and she flees the house. As she is running away, she is hit by a velocycle (which is similar to a motorcycle, I think) and knocked unconscious.

The driver of that velocycle is Griffin King, a duke. He is surprised that Finley is still alive, expecting the impact to have killed her. But she’s tougher than we realize, our Finley is. Griffin takes her back to his house, against the advice of his friend Sam, who is also there, to figure out exactly who Finley is.

Here’s the part that I love. Griffin’s house is a collection of people with some sort of supernatural powers. There’s Sam, who is also incredibly strong. Emily, who can communicate with machines. Jasper, their American friend, who has super speed. And Griffin, who can work with the Aether, a sort of spirit plane that gives him power. I love these characters, even Sam, who can be a bit of a whiner. They all fit together so well and their friendship was the best part of the book, especially how Finley falls right in with them.

There’s also Jack Dandy, a roguish semi-noble who leads an underground group of troublemakers. Finley needs his help and can’t help but feel attracted to him, despite her growing feelings for Griffin. Dandy is probably one of my favorite characters in the book, just because he can be so snarky. Y’all know how much I love my snark!

But it’s not all fun and games. There is an evil man, known only as the Machinist, who has done something to the automatons around London, making them turn on their owners and killing them. Sam was attacked by one and barely survives. It’s up to Griffin and his friends, Finley included, to try and find out who the Machinist and stop him before he can carry out his evil plan.

It was a good book, a fun story. The main complaint I had was that there came  a point where it was blindingly obvious who the bad guy was. I would have liked it to be a bit more mysterious. The story definitely kept me interested though and had enough twists and turns that I couldn’t put it down. The ending is really suspenseful and at times disturbing, which is always good too.

I’m going to start giving my rating from GoodReads, just because it’s a good comparison. I gave this book four stars. It was a fun, enjoyable adventure, with interesting characters and a touch of humor. I will definitely continue reading the series, just as soon as we get the episode recorded.