A couple of things before I get started. First, I want to wish a very happy birthday to my mom! Hope you have a wonderful day!

Second, I noticed something when I posted my blog yesterday. WordPress said that I had posted my 199th post which means . . . this post is my 200th post! I’m a little bit blown away by that. Who knew I would stick with something for so long!

So on to the review. Today’s review is Shadow of Night by Deborah Harkness, the second book in the All Souls trilogy. You can find my review of the first book, A Discovery of Witches, here. While I enjoyed both books, Shadow of Night suffers from the same things that the first book did, plus had a few issues of its own, which made me not enjoy it as much. 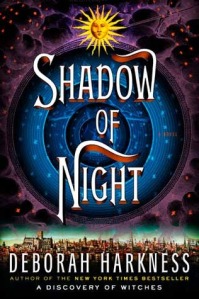 Diana Bishop is still struggling to figure out just what her powers mean, since she’s spent the better part of her life ignoring them. She also found out that she had been spellbound, unable to access her full magic. On top of everything else, the Congregation is still after her and her husband, Matthew Clairmont, because they had the audacity to fall in love and get married (and since Matthew is a vampire, that’s a big no-no). And then, there’s also that mysterious manuscript, Ashmole 782, that ties the two together, and that the Congregation would do anything to get their hands on.

Here’s where the book got very interesting, but also annoyed me just a bit. Diana and Matthew decide that the best course of action is to go back in time, to escape the Congregation, to find Diana a teacher, and to find the manuscript in it’s original state (or as close as they can get, anyway). They go back to Elizabethan England, where Matthew has some friends. Rather famous friends, like Christopher Marlowe, William Shakespeare, and Sir Walter Raleigh, just to name a few. Oh, and he also happens to work as a spy for Queen Elizabeth.

This is where Harkness’s historian background really shines – she really captures what Elizabethan England would be like, from the sights to the sounds to the smells. It’s one of the reasons why her overly detailed descriptions didn’t bother me this time around. I wanted to know what this world was like, and she definitely delivered. Matthew’s character is slipped in seamlessly into the mysterious School of Night. The witches that Diana finds to teach her are wonderful characters. The magical system that flows through the story is very well invented and interesting. But there’s one thing that bugs me just a bit, and that’s the time traveling.

That’s my main complaint with the book. Again, I think it could have been shorter. The descriptions are better here, where we want to have more details, but they are still way too long, especially once we get the world established. There are also a whole lot of characters, as if Harkness wanted to throw as much of Elizabethan England into her story as possible. I guess I can’t fault her for that too much, since it is pretty fascinating, but at times it was a bit much.

So overall, another good read, but not quite as good as the first for me. Will I read book three when it comes out? Probably. I am curious to see where she’s going with this.