Today’s book review is Rhapsody by Elizabeth Haydon, the first book in the Symphony of Ages series. This was recommended to me by my friend and podcast co-host Jess and was a book club book over at the Mallorean Tavern. Before I get to the review, there is one thing I want to discuss. This author has disappeared.

It’s true, or at least mostly true. Jess knows more about this than I do, since she was following this series pretty closely. At the beginning (in 1999), Haydon was publishing one book per year, or sometimes every two years. In 2006, she published the first book in a new YA series, The Lost Journals of Ven Polypheme, but still continued to write the Symphony books. There are now six Symphony books and two Ven books (according to GoodReads), but nothing has come out now since 2008. I know five years isn’t a long time in publishing circles, but to go from one book per year to nothing? That’s a little strange.

Jess and I were concerned that perhaps Elizabeth Haydon had passed away. Her official website (which I never saw, but Jess says existed) is gone. There is a link to a website for her on her GoodReads page, but it only brings up her Wikipedia page, which doesn’t list anything other than her official bio. The only thing to be found is a discussion board posting on Amazon.com where someone says that she is still writing and still intending to finish both series. I have no idea who this person is or where they got their information, but there is a lot of people going back and forth on there as to whether the information is accurate.

A very strange story. I hope Elizabeth Haydon is well and knows that her fans love her and are concerned. It’s very odd for someone to just vanish like this. 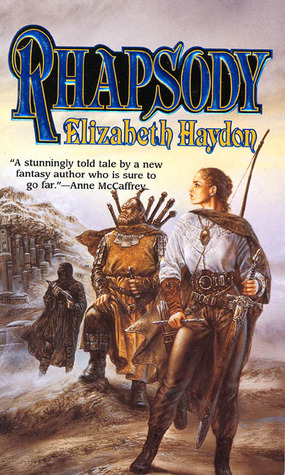 Anyway, on to the review. Rhapsody is a strange book. It’s also a very looooong book. It begins with this fellow named Meridion, who is watching Time pass through a machine. He plucks out a young man named Gwydion and moves him backwards in time to a point over a thousand years prior. Gwydion meets a girl named Emily and the two instantly fall in love. Gwydion promises to marry Emily, but as soon as Gwydion is alone again, Meridion moves him back to his own time period. Gwydion is devastated, and we can assume Emily will be too once she finds out.

Cut to the story of Rhapsody, a young Lirin singer. She was once a prostitute and a former client is harassing her. As she is trying to escape from the police, she runs into two men. As a singer, she has the power to Name someone, which can change their nature. When she meets these two strange men, she hopes she can use them to help her. She calls one of them her brother and says his name is Achmed the Snake. And all at once, this becomes true. The man’s name changes and they both agree to help her, for reasons of their own.

Rhapsody learns that they are not men, but part human, part Bolg. We also learn that Achmed, who before was known only as “the Brother,” had once been enslaved to a powerful demon because that demon had his true name locked away. Rhapsody’s renaming has broken that bond, but Achmed and his companion, Grunthor, are still being hunted. When Rhapsody hears that they are going to the Great Tree, a powerful and revered place of the Lirin, she agrees to go with them in order to escape the man hunting her.

Once they get to the Tree, they are attacked on many sides. Achmed cuts into the tree and the three of them disappear into the roots. They spend a realy long time traveling through the root system of the Great Tree. A really, really, really long time. The story kind of drags a bit here, but there are some important things that happen as well. They find a sleeping dragon, which Rhapsody casts a spell on so that he will not wake. They also come to the center of the Earth, which is a huge ball of fire. They are able to pass through the fire, although they are all changed drastically. It takes a while for them to realize how much.

Eventually, they make it out of the tree and find out that 1500 years has passed. They meet many people who help them, and I won’t go into all of them here. To sum up part of the plot, Achmed wants to go and reclaim the kingdom of the Blog, which has been destroyed, and sets himself up as king. There is still a demon out there looking for him though. Rhapsody meets a young man named Ashe who is more than what he seems, yet is completely enthralled with Rhapsody. And at the very end of the story, we see Meridion again, still huddled over his Time Editing machine, only this time, the strand of time he’s looking at snaps in half.

For the most part, this book was a bit of a disappointment, which was sad because I really wanted to enjoy it more than I did. Parts of it went so slow, and that made it hard for me to keep up with some of the lesser characters. Because of that, I started to loose interest in parts of it. I was really intrigued by Meridion and what he’s doing, but it was also very confusing. There is also the possibility that since I had to read this so fast for the book club, I wasn’t able to really digest it. There were lots of things that were good about the book – I really like Rhapsody, Achmed and Grunthor (Grunthor especially). The mythology created was very interesting, especially with all the music combining with the magic. I might have to re-read this one at some point, but for right now, it was good and I enjoyed it, but I wasn’t over the moon about it.

Has anyone else read it? Or heard anything about Elizabeth Haydon?