My God, this book!

This is another one that I’ve wanted to talk about ever since I finished it, because it completely blew me away. After the last page, I just sat there, staring at the book, thinking to myself, “What just happened?” I am referring to Feed by Mira Grant, the first book in the Newsflesh trilogy.

Special thanks to the folks over at Mark Reads for introducing me to this book. I would never have picked it up otherwise. 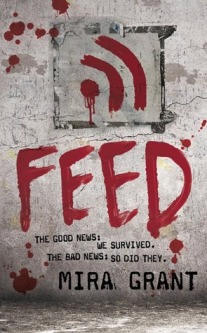 This is a zombie book. Except that it isn’t really. This is a political thriller that just happens to have zombies in it. The book opens several decades after “the Rising” and tells the story of Georgia Mason and her twin brother Shaun. They are both journalists, but not in the way you think. They are bloggers, but more on that later. They get assigned to follow the campaign of a presidential candidate and, while there, they uncover a conspiracy that will change everything about the world as they know it.

The story world that Mira Grant creates is astounding. Sure, it’s just the U.S.A., which you wouldn’t think would be that different from the way things are now. But the country post-Rising is an entirely different place. Let’s start with the two main characters. Like I said, they are journalists who run the site “After the End Times.” The reason that bloggers are held in such high esteem is because no one trusts the mainstream media with news anymore. The mainstream media lied to the public during the Rising, telling everyone that things were fine, that there was nothing to worry about. The Internet told a different story. The blogosphere became where you went to find out what was really happening, where the zombies were, and what to do to be safe. To find out the truth.

Grant has also done her homework in the bio-science field, creating a zombie virus that seems frighteningly plausible – the Kellis-Amberlee virus. What started out as two separate viruses, created in two different laboratories,  aimed at ridding the world of its two most prevalent illnesses (cancer and the common cold), was accidentally combined during a terrorist attack. As the virus mutated, it became a nightmare, causing the dead to reanimate, consumed only with the need to feed.

Do you see yet why this book is so terrifying?

The entire story holds a level of tension and suspense that never diminishes. Reading it one chapter at a time with Mark Reads was SO HARD! I actually gave up in the last five chapters because I couldn’t take it any more. I had to know what was happening. And I will tell you this – not giving away anything – the ending was something that I have never, ever read before. It took me completely by surprise. It was never even anticipated. I was stunned. The bad thing was that I finished this book during my lunch hour and had to put it back in my purse and actually work, all the while thinking of nothing else but this book. It was a long afternoon.

If zombies are your thing, you should definitely give this book a shot. It’s the most realistic portrayal of the genre I’ve ever read. If zombies aren’t your thing, you might still want to check it out because, even though the zombies are there, they aren’t the main focus of the story. I’m so glad that Mark is reading the next books in the series as well because I NEED TO KNOW WHAT HAPPENS!!!