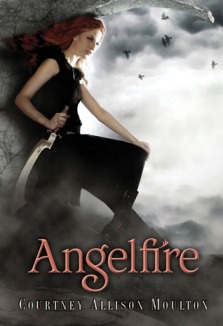 I read this book to review it on Bibliophiles Anonymous – Angelfire by Courtney Allison Moulton. There have been a lot of “angels vs. demons” stories out there lately, but I thought this book did something a little bit different, which I always appreciate. The story is about a girl named Ellie. Ellie keeps having nightmares about fighting monsters. She doesn’t know why, and she certainly doesn’t like it. Then she meets Will, a young man who is very mysterious. She feels a connection to Will that she can’t explain.

Then she finds out that she has lived many, many lives, fighting demons with her swords of angelfire. These monsters, called reapers, are looking for her, trying to kill her again. Will has also traveled with her throughout her lifetimes, acting as her guardian. Every time, she has been killed by the reapers, and every time, he has had to wait for her to be reborn, to grow up, and then regain her memories.

But something is wrong this time. Ellie can’t remember her past lives and has to relearn how to fight. She is a creature unto herself, unprecedented. No one knows why she has the power that she does, or what has happened to keep her from remembering.

Of course it’s predictable that Ellie and Will fall in love, despite their differences in status. But this book was anything but predictable in other ways, especially the huge reveal at the end. It threw me for a loop! This book has a lot of little twists and turns that make it very enjoyable to read, even if Ellie sounds like a spoiled brat from time to time. She has a lot going on, trying to fight reapers by night, having a normal teenage life during the day.

This book is the first in a trilogy. The second book is out now, the third one due to be released sometime next year. When I have time, I definitely plan on picking up the next book. The story intrigued me. I want to see where this is going.

Writing Challenge Update: over halfway there!