So a while ago, I decided that I wanted to watch more movies, both in the theater and at home. I used to go to the movies all the time, but lately there have been tons of movies that have come and gone and were basically ignored by the Calvin household. One way to achieve this goal is with the help of the children, which is how I ended up going to see Disney*Pixar’s latest release, Brave. 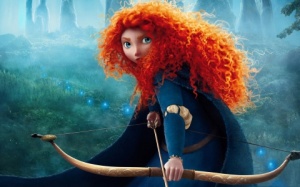 I love cartoons. I always have. And I love Disney Princess movies – around my daughter, I really had no choice. But there is something to be said about those movies where the young girl is always falling in love with the handsome prince and living happily ever after. Good stories, but it gets old after a while. Brave tells a different princess story. Merida is everything but a cultured princess. She’s a wild child, with crazy curly hair, who doesn’t want anything to do with her mother’s lessons of how to be a proper princess. She would much rather shoot her bow and arrow and ride the countryside on her horse. But the time has come for Merida to get married, as per tradition, and she has to choose a suitor from among the oldest sons of the clan chiefs (and let me tell you, pickings are slim!). Merida is less than thrilled about this idea, so she ends up going to a witch to purchase a spell to change her mother’s mind about the marriage situation.

The artwork in this movie is absolutely stunning and I loved the Celtic inspired soundtrack. It’s hard to believe in some places that this is an animated movie. Merida is spunky and at times a royal brat, but you can’t help liking her spirit. The supporting cast are all very funny and, while the ending will certainly not surprise you (this is Disney, after all), it is still very heartfelt and might bring a tear to your eye.

I really enjoyed this movie. It was nice seeing a Disney Princess film that wasn’t about falling in love and was instead about the relationship between a mother and daughter. And my daughter loved it so much, she wanted to see it a second time. We took her grandma with us, and she loved it too.