Still trying to catch up on all the books I’ve read so far. I’ve been a reading machine lately!

Clockwork Angel by Cassandra Clare – this one was really good. I’ve read the first three books in her Mortal Instruments series (which I thought were supposed to be a trilogy, but there’s a new one out that I haven’t read yet) 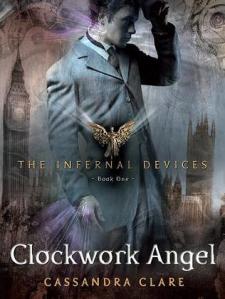 and thoroughly enjoyed them. Clockwork Angel is the first book in the Infernal Devices series, which is a prequel series to Mortal Instruments.

The story follows Tessa, a sixteen year old girl who moves to London after the death of her aunt and guardian. Her older brother has moved there already and gotten established. Once she arrives, she is immediately kidnapped and forced to develop a power that, until now, she didn’t even know she possessed. She can shape shift – morph into the likeness of other people. She doesn’t know why they are doing this, but she is rescued by the London Shadowhunters, who do what they can to help her and save her brother, who has also become entangled in London’s mysterious Downworld.

The thing I like best about Cassandra Clare’s writing is that despite her books being extremely dark and, at times, gruesome, there is so much humor it it. Tessa meets Will, one of the Shadowhunters, and they have an instant connection, even though she is pretty sure most of the time she hates him. Will can be cocky and arrogant, but he also has a vulnerable side. They both know how to push each other’s buttons though, and it’s very enjoyable to read. 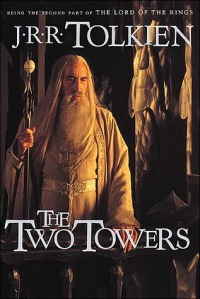 I also finished The Lord of the Rings: The Two Towers by J.R.R. Tolkien. I never know quite what to say about these. The book is amazing, of course, but I feel as though everything about Lord of the Rings has already been said. I can say that re-reading them with MarkReads has been wonderful – it’s such a good way to remember how it felt when I read these books for the first time. Sometimes re-reading books, even books that you love, can be tiresome. There are parts that you skim over, even though you know that they are important to the story. Reading this along with someone who is experiencing the magic for the first time is fun. We’ve already moved into Return of the King, and I can’t wait to see his reaction to how the whole series wraps up. It should be fun.

The new work schedule started on Monday and, so far, I really like it. I’ve been moving along with my writing. Plus it gives me extra time to post here as well!

Like Loading...
‹ The Name of the Star by Maureen Johnson
Don’t you see how much nicer it would be if it was a secret? ›