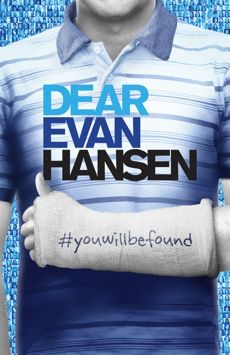 As many of you know by now, I am a huge theater fan and have been since I was ten years old. I love it. I love the drama, the staging, the music, the lights, everything. I even took the plunge six years ago and got involved in theater myself, finally plucking up the courage to audition for a local community theater production of Into the Woods and getting in the show. Since then, I’ve been in ten shows (I think, I keep miscounting them) and have seen dozens of others, whether they be a full production on Broadway or a smaller, more intimate local show.

I don’t think there has ever been a show that has touched me as much as Dear Evan Hansen.

I first heard about the show watching the Tony Awards, seeing Ben Platt sing “Waving Through a Window.” I fell in love with that song and immediately got the soundtrack. I connected with many of the characters the more I discovered. I have dealt with depression and anxiety my entire life, which made me have major issues my senior year of high school, so I connected with Evan’s insecurities on wishing he could just be normal and fit in. I also, perhaps even more so, connected with Evan’s mom, Heidi. She has a song that she sings towards the end of the show called “So Big/So Small” where she talks about her experience as a single mom, watching the father of her child walk away, and constantly feeling like she was never able to do enough for Evan. I have a very difficult time listening to this song without at least getting a bit misty eyed because I know those feelings so well too. My daughter’s dad left us and, while he didn’t completely abandon her, he did live several states away for the last seven years, and I did always feel like I was never doing enough for my kid.

And I knew there would be moments that I’d miss.

And I knew there would be space I couldn’t fill.

And I knew I’d come up short a million different ways . . . and I did.

Fun story: I got the chance to see Dear Evan Hansen on Broadway last October when my husband and I went up to New York for our anniversary. He knew nothing about the story or the music, only knowing that I really wanted to see it. During intermission, I turned to him, still feeling emotional after “You Will Be Found,” and asked him if he was enjoying it. He said that he was enjoying it a lot more than he expected and then described the show in the best way possible.

I have recently introduced him to YA literature and he has read several John Green novels and liked them. So this was a good sign to me, who worried that my husband, who thinks musicals should all be fluffy, happy comedies, might really dislike a show dealing with teen depression and suicide. That said, for a show that deals with such serious topics, there is also quite a bit of humor in it, including some laugh out loud moments. And because being a teenager in today’s modern world is like riding a roller coaster, the very high ups and the very deep downs actually works really well.

As soon as I saw the show on Broadway, I wanted to share it with my mom and my daughter. I looked up show dates for the US Tour and originally thought we could see it somewhere fairly close, like Durham or Charlotte. Sadly, due to sharing a season with the juggernaut that is Hamilton, tickets for the entire season of shows were limited. I did find availability in Greenville, South Carolina, which is only three hours away, so I scooped up five tickets and planned to take my whole family to see it, including my stepson who isn’t really into theater, but has heard of the show because he takes dance at school instead of P.E. and one of the routines he did at his last dance concert was to “Words Fail.”

This show hit me so hard the second time around. Here’s why.

I was sitting next to my daughter, who is fourteen years old and who did not want to come to this show. At all. She knew a little bit about it, mostly from me talking endlessly about how much I liked it, and by hearing a couple of songs while we were in the car. Of all the people in my family, it was my daughter who I really wanted to see this. See, she has major issues with depression and anxiety, as well as a tendency to lie (or at least reeeeeeeally stretch the truth). The main plot point of the show is that Evan ends up telling a really big lie to try and cover up his insecurities. Evan is instructed by his therapist to write letters to himself to try and work out some of his issues, but one of his letters is found by the school troublemaker, Connor Murphy. Connor is an outcast who is known to do drugs and lashes out at everyone. He steals one of Evan’s letters, noticing that it mentions his sister Zoe, who Evan has a crush on. Later, that letter is mistaken for Connor’s suicide note.

Evan doesn’t want to admit to Connor’s grieving parents that he was writing letters to himself, so he goes along with what they believe, that Connor wrote his suicide note to Evan because they were secretly friends. This lie gets bigger and bigger as the story spreads and as Evan’s speech given at Connor’s memorial service is posted online and goes viral. At this point, the Murphys have brought Evan into their home, showing Evan what he never had at his own house: a picture perfect family. They find comfort in this version of Connor that Evan has, of them being friends and Connor being happy. Evan finds happiness not only in spending time in their home, but developing a relationship with Zoe. Remember though, it’s all based on a lie. And it does all fall apart eventually.

I never had the dad who stuck it out

No corny jokes or baseball gloves

No mom who just was there

‘Cause mom was all that she had to be

The Murphys appear like a perfect nuclear family from the outside, but they have their fair share of issues as well. This all does lead to Evan understanding his mother, Heidi, a lot more. She loves him so much, which is why she is working so hard to support them and going back to school to try and improve their lives. Nothing is perfect. Life is messy sometimes. But that’s okay.

So back to my daughter, who started crying around the song “Disappear.” She has always had issues with her identity and where she fits in, not just at school, but in our family and just in the world in general. She also had an experience last year where a girl at her school committed suicide. They were friends, although not super close, and my daughter has had a very hard time dealing with it, especially since the school didn’t do much to honor her friend.

No one deserves to be forgotten.

No one deserves to fade away.

No one should come and go,

And let no one know he was ever even here.

No one deserves to disappear.

This failing to honor her friend at her school made the whole scenario in “You Will Be Found” all the more poignant. It was not just about Connor. It was what she wished could have been done for her friend. Let’s just say we needed to find a lot of tissues at intermission.

I knew that this would bring up a lot of difficult feelings for her, but that was also why I felt it was important for her to see it. One of the issues that people with depression and anxiety have is the feeling of being completely alone, that no one would ever understand what we are feeling. Another main theme in this show is that we aren’t alone, that we are all interconnected, now more than ever. It shows both the good and the ugly side of social media, how it can make you feel uplifted (like all the people supporting The Connor Project) or how it can try to crush you (like the backlash the Murphys got after Connor’s suicide note was posted, addressed to Evan and not them).

There was also a time last school year where my daughter kept telling me to just give up on her. That she was a bad kid and it wasn’t going to change, so I should stop trying to make everything better and just quit. During “So Big/So Small,” she reached over and grabbed my hand. No matter how many times I told her that I could not and would not ever give up, sometimes you just need the medium of song to really impart what you need to say.

Your mom is staying right here,

This post has been a bit of a ramble, but I did want to say that this touring production is phenomenal. I actually thought that it was as good or better than what we saw on Broadway. If you have a chance to go see it, please try to. This is a show that everyone should see, that everyone takes something different away from. My mom, who also loved it, saw it in a completely different way, as did my husband and stepson. The music is incredible and will bring all the feels, so don’t forget your tissues like we did.

Today is going to be a good day, and here’s why. Because today at least, you’re you. And that’s enough.