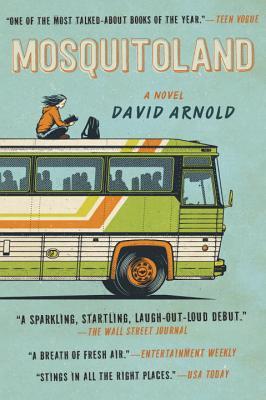 Blurb: After the sudden collapse of her family, Mim Malone is dragged from her home in northern Ohio to the “wastelands” of Mississippi, where she lives in a medicated milieu with her dad and new stepmom. Before the dust has a chance to settle, she learns her mother is sick back in Cleveland.

So she ditches her new life and hops aboard a northbound Greyhound bus to her real home and her real mother, meeting a quirky cast of fellow travelers along the way. But when her thousand-mile journey takes a few turns she could never see coming, Mim must confront her own demons, redefining her notions of love, loyalty, and what it means to be sane.

I have so many other reviews that I should probably get written first, but I had to jump ahead to this one, especially since so many people were curious about this one.

First things first – I LOVED this book. I probably could have read it in one sitting if I had the time. I loved everything about Mim – her quirkiness, her dark sense of humor. But before I get into my review, I wanted to address a few things that I saw on GoodReads where people were giving this one star reviews.

Is this book for everyone? Of course not! There are very few books that are. I saw several people say that David Arnold was trying to copy John Green’s formula of making teenagers way too deep and philosophical for their age. Okay, first of all, John Green has sold a lot of books using this formula, if you want to call it that, and he has garnered a lot of teenage fans who could identify with his characters. If that was David Arnold’s inspiration, it’s not a bad one to use. Besides that, every time I see someone make that complaint about Green or Arnold or any number of YA authors, I feel like they are denigrating teenagers as a whole. Sure, many of us were chuckleheads at that age, but I knew and know a lot of very mature, thoughtful, philosophical teens who would fit very easily into any of these narratives.

The other complaint about Arnold’s writing that I saw was that the experiences Mim has were too convenient and too unrealistic. Um, hello? This is FICTION! It’s not a true story! If a character or a scenario exists as only a plot point, well then, that was the author’s choice. Whether or not it was a good choice can be debatable, but don’t get down on authors for making their fiction too fictitious. That’s kind of their job, unless they are writing a biography or something, and even then, there’s some wiggle room.

I thought this book was beautifully written. I love when characters do something that I know I would never have the courage to do, in this case, take off across the country to find out answers. During the trip, Mim meets all kinds of people, including the sweet old lady, Arlene; the creepy “Pancho Guy;” Walt, a lovable kid with Downs Syndrome; and many more (including one major one that I am leaving out because I don’t want to spoil some things).

At several times in the book, Mim is writing letters to “Isabel,” someone we don’t fully understand until the very end of the book.This is one that I am looking forward to re-reading some day so that I can go back and see how the letters make me feel now that I know who Isabel is. I’m sure that will change some things. She also shares many memories about her mother, who she doesn’t live with. We don’t find out why until the end, and although it wasn’t a huge surprise, it still packs a pretty hard punch. We also see her trying to come to grips with her father and new stepmother, which includes a whole lot of resentment and anger.

I thought this book was great. I gave it five stars on GoodReads.