I am officially back from vacation. My husband and I, our two kids, my mother and my mother-in-law all piled into two cars and headed down to south Florida. We spent part of the week visiting family, going to the beach, and hanging out by the pool (it’s a rough life, I know). Then we packed back up and headed to Orlando, the theme park capital of the world.

We planned out three theme parks to visit in three days. I would like to warn all my readers against this idea – it was exhausting. By the last day, I was so tired and in so much pain, I didn’t know if I would make it. Just to give you an idea: my mom wears a pedometer for her fitness routine to measure how many steps she takes during the day. It also converts her steps into mileage. According to her, we walked 28 miles in three days. Oy!

Our first theme park was Universal’s Islands of Adventure. I had never been there before and was really excited to go, mostly for one reason – I wanted to go to Hogwarts! 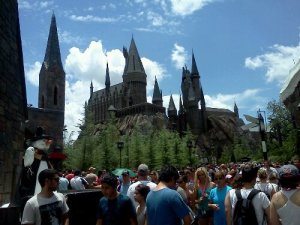 That said, I have to admit that the Wizarding World of Harry Potter was a little disappointing. The section of the park is really small and incredibly crowded. I understand that everyone is excited to go, but most of it felt very cramped, especially the stores. Also, they only have three rides, two of which are roller coasters. I don’t really care for roller coasters much, so that left me, and other HP fans of like minds, with not much to do.

But lets talk about the good stuff. The atmosphere in that place is incredible. They did do an excellent job staying true to the story and the world created by the films. The snow on the rooftops looks so real, you almost forget the 90 degree temperatures (almost, but not quite – it was HOT!). I got to taste Butterbeer and Pumpkin Juice, both of which are delicious.

The centerpiece, though, is Hogwarts Castle and the ride Harry Potter and the Forbidden Journey. It was awesome. We waited in line for 90 minutes, but it was worth it. A good part of the line is inside and you get to wander through the castle hallways, Dumbledore’s office, and the Defense Against the Dark Arts classroom. Harry, Ron, and Hermione come out and talk to you, as does Dumbledore. The ride itself is part simulator in front of screens, part swinging through castle sets. You get chased by dragons and dementors, plus fly through a Quidditch game.

It was a lot of fun, but I don’t know if I’ll go back. I definitely had to go at least once. More vacation news to come!