This comes a few days late, but since I just started this blog, I definitely wanted to mention it here before it got any later. One of my favorite authors, Anne McCaffrey, died last week. She was a very inspiring and prolific author, writing nearly 100 novels in her lifetime. Wow, that’s a lot! She was also the first woman to win both the Nebula Award and the Hugo Award, the top prizes for science-fiction and fantasy. 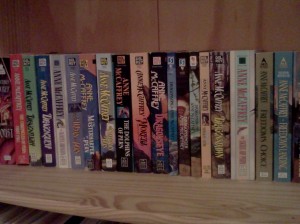 As you can see, I have quite a few of her books. I mostly read her Dragonriders of Pern series, which are still some of my favorites. I especially loved the ones set in Harper Hall. The Harpers of Pern were sort of like bards – they learned Teaching Ballads (and created new ones) and then were sent out to other holds to teach the people their history through song. When I first read these books, I wanted nothing more than to be a Harper. I wanted to live in Harper Hall and write music and poems to send out to the people. The Masterharper of Pern is probably my favorite book of the Dragonriders series.

I think that the goal of writing fantasy (or any speculative fiction, really) is to create worlds that we know logically don’t exist, but that we wish with all our hearts could exist. By those standards, Anne McCaffrey was one of the best in her craft.

Rest in peace, Anne. You will be missed.