Nostalgic Reads – The Truth About Stacey 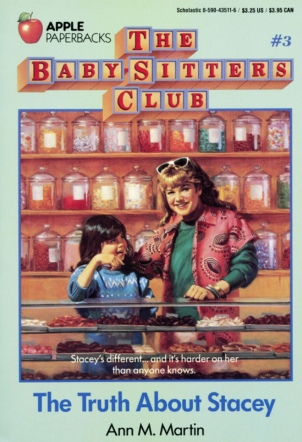 Title: The Truth About Stacey

Blurb: The truth about Stacey is that she has diabetes. Nobody knows . . . except her friends in the Baby-Sitters Club. But even they don’t know the real truth about Stacey. Stacey’s problem is her parents. They won’t admit she has the disease, and they drag her to practically every doctor in America! Seeing so many doctors made Stacey lose one friend, and she won’t let it happen again. Especially now — when the Baby-Sitters Club needs her more than ever.

Review: In this book, we get to know our third BSC member, Stacey McGill. She is new to Stoneybrook, is the same fashion forward sort like Claudia is. She grew up in New York City and was fairly recently diagnosed with diabetes. She was afraid to tell anyone what was going on at her old school in the City, so all her old friends thought she was being a drama queen and a liar when she was having all her health issues, especially her ex-best friend Laine.

Which, I’m sorry, is a really crappy thing to do. If my best friend was fainting at school, going to the doctor a lot, even getting taken to the hospital, I wouldn’t get mad at them. I’d be worried. I’d be checking in on them all the time to make sure they were okay. Ugh! The problem is that Laine was never told what was going on, and without Stacey being honest about it, it created a huge misunderstanding. The girls get to reconcile when Stacey has to go to the City to visit yet another doctor, this one who happens to be a quack.

The big problem that the BCS faces in this book is competition. A new group called the Baby-Sitters Agency is advertising older sitters, being able to stay out later, and have cheaper prices. They start edging in on the BCS’s territory. The two girls that run it are awful and the sitters they get are not much better. Stacey and the others start hearing from the kids they sit for that they are not happy. The new sitters don’t play with them, some of them invite their boyfriends to come over, and one burned a hole in a couch with a cigarette. Eventually, after the BCS finds one of their three year old charges playing in the street by himself, they are able to reveal just how lousy the Agency is. The Agency doesn’t care about the kids — they are only in it for the money. The Baby-Sitters Club is far superior, and now everyone knows it. Huzzah!